Turkestan (Türkistan) is a huge state located in Central Asia. It covers an area of 1,915,300 sq. çaqırım (2,181,200 sq. km/842,200 sq. mi). It is a fairly cosmopolitan state: ethnically and religiously diverse, managing to combine a strong sense of its own traditions with an embrace of modernity.

Turkestan is ruled by a monarch (the Ilxan) elected for life by the assembled Keņes (parliament). The Keņes retains most of the power, but the Ilxan does have more power and influence than most monarchs of democratic societies; while the legislative authority of the state is firmly in the hands of the Keņes, executive power is finely balanced between the head of the Keņes and the reigning Ilxan.

Members of parliament are known as Keņesçi. The Head of Government and leader of the Keņes is the Keņesbaşı.

Turkestan is divided into six provinces:

Most of northern Turkestan is steppe. The south and east are mountainous, the Ala Tau mountains close to Almalıq curve around into the Tyan Şan and Pamir mountain ranges in Kırğızstan and Tajikistan. The west is desert or semi-desert. The most fertile and populous region of the country is the Farğana valley in Üzbekistan. 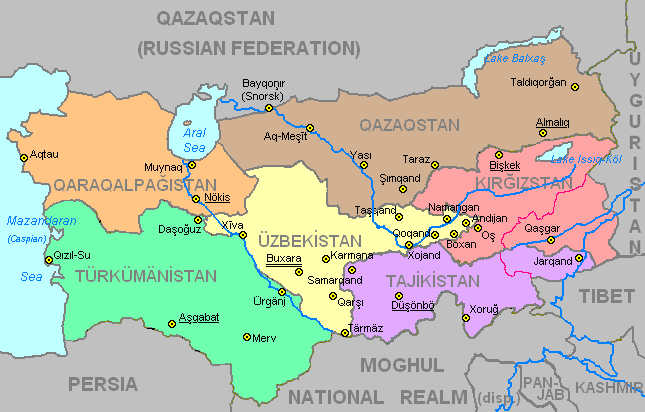 Map of Turkestan. The area behind the red line was added to Turkestan in 1997.

About half of the 51.6 million inhabitants of Turkestan are Uzbeks. Other nationalities include: Qazaqs, Kırğız, Tajiks, Türkümäns (Turcomans) and Qaraqalpaqs.

Smaller minorities include the Uygur population of eastern Kırğızstan around Qaşgar, the Kalmyks of the region south of Lake Balxaş, the few remaining Chinese not driven out by the Government of National Unity and the tiny, scattered Russian population. There are also immigrant groups from Tibet, Mongolia, Persia and the Moghul National Realm, speaking the languages of those nations.

Turkestan gained its independence from Russia in an uprising known as the Basmaçı Revolt, which began in 1916. Independence of the entire region was not declared until 1917, however, and fighting over the region continued until 1922, when by the terms of the peace treaty the territory of the Qazaqs was partitioned between the two states.

After gaining its independence, the new state settled down to create its own government (see Qurultaı), and for a while became one of the more relentlessly isolationist states around. League of Nations membership was gained in 1924, mostly as a way of guaranteeing their security, but Turkestan did not participate very much in international affairs, preferring to keep itself to itself.

One of the great internal policy successes of the Qurultaı was the national literacy drive of the 1920s and 1930s. Prior to independence, the ability to read was the province of the few, but the great literacy drive did succeed in standardising the multiplicity of scripts into one, and in bringing the written word to the masses.

Another, perhaps more peculiarly Turkestani, innovation of the Qurultaı period was the founding of the national Registry of Tamğas to document and regulate the use of traditional tribal and clan insignia.

Following the Russian invasion, Turkestan came under Chinese hegemony, a fact which was only changed by the establishment of a pro-Russian Snorist government.

The Chinese helped the Turkestanis to make some of their first steps toward industrialisation and becoming a modern state, though this fact was downplayed and ignored by the snorist Government of National Unity.

During the years 1948-1990, Turkestan was a Russian satellite with a SNOR-analogue government. The Government of National Unity was very different from the slightly chaotic free-for-all that was the Qurultaı: centralist, party-focused, not overly responsive to the wishes and wants of the people; in fact, a regular, run-of-the-mill snorist regime. However, its ideology was similar to what had gone before in that it was pan-Turkestani, non-ethnically-based and nationalist. Russia, however, went from being the great enemy of the Qurultaı period to being seen as a kind of beneficient and protective elder-brother state, and any criticism of Russia was seen as disloyal and punished.

It was in the snorist period that Turkestan really went from being an insular, backward, agrarian society to becoming a modern state, though even the Russia-idolism of the EBÜK regime could not erase the general Central Asian-ness of the nation; indeed, in many respects it did not even try. As long as Turkestan did not make trouble for Mother Russia, the White Council were content to mostly leave them to their own devices.

The reinvention of the title Ilxan for the Turkestani Head of State dates from this period. Jalan Quyrat-ulı, the first snorist ruler of Turkestan, recreated the title and bestowed it on himself, and in the EBÜK period, the Ilxanate persisted as the legitimising title of the snorist dictators that ruled the country.

In 1969 the state became the driving force behind the founding of the Silk Road League, and in 1989 it was admitted to COPEN following the 1978 discovery of the Caspian Sea oil reserves.

Currently, the country is still being ruled by post-Snorists. Although it has a multiple-party political system, most, if not all, of the parties are comprised of former members of the EBÜK regime, and this lends a certain amount of scepticism to the average Turkestani voter when confronted by more than 40 different political groups all claiming to believe different things, whose leaders were almost without exception all members of the previous ruling junta. The nation has, however, made large strides toward re-inventing its political culture as a democracy.

The previous regime was disbanded in 1990-1991 and a new elected monarchy was established in its place. The current Head of State is the Ilxan Sultan Qasım-ulı.

Despite a mutual eagerness for reunification with the Qazaq republic that is now a constituent part of the Russian Federation, Turkestan's relations with Russia are still fairly good. Turkestan also maintains close relations its other neighbours Uyguristan, Persia, and the Moghul National Realm. Relations are also good with Turkey, Mongolia and Azerbaijan.

However, the relations with neighbouring Uyguristan are overshadowed by a recent conflict over the Qaşgar (Kashgar/Kashi) region. The Qaşgar region was an Uygur province with a Kırğız/Tajik majority, which declared itself part of Turkestan in 1991. This separatism ended in a war between the two nations between the years of 1991 and 1994, when a League of Nations-brokered peace agreement was reached. As a result of this agreement, the province was officially transferred to Turkestan in 1997, and all residents obtained dual citizenship of Turkestan and Uyguristan. Uygur nationalists, however, do not recognise Turkestan's annexation of the Qaşgar province, and for this reason the relations between the two states are fragile.

Turkestan's relations with Tibet are also underlain with some tension. Most of Turkestan's Tibetan population are followers and loyalists of the Dalai Lama-in-exile, and demonstrations are frequent outside Tibet's diplomatic missions.

The basic currency unit is the Som. 1 Som is divided into 200 Qapçıq.

The name of the currency is derived from "som", a local term for the Tsarist Russian rouble introduced with the first Russian conquest of Central Asia. "Qapçıq" is a Turkised version of "kopek", the old subdivision of the rouble; however, the relative values were changed on independence, so that whereas one rouble was equal to 100 kopeks, 1 som is equal to 200 qapçıq.

How to tell if you're Turkestani...

Several different religious communities exist in Turkestan. The largest three are the Muslim community, the Assyrian Church and the Zoroastrians, who together make up almost three-quarters of the population. The remainder of the population is divided between Manesianity (about half the remainder), Turkic shamanistic paganism (Tengriism), Russian Orthodoxy, Judaism, Buddhism and other groups.

The situation of Turkestan's Judaists is possibly unique: most of them belong to a Kırğız tribe which adopted Judaism at some time in the past, as other tribes and rulers adopted Christianity, Buddhism or Islam. They are circumcised and follow the Torah as best as they are able, including being the only Judaists to still follow large parts of the sacrificial system.

Current figures for the different religious groups are as follows: