Jalan Quyrat-ulı was a Turkestani Manesian Elect and soldier who was made the first Head of the Keņes. He ruled as an autocrat, recreating the ancient title of Ilxan and bestowing it upon himself in 1951 as a way of legitimising his rule. It was he who set up the Department of Homeland Security, created the Turkestan Rail Network, modernised the cities of Almalıq and Buxara and generally dragged Turkestan forcibly into the modern world. Only a Snorist dictator could have done what he did, but the violence of his regime was terrible.

Accession to the Headship of the Keņes

Jalan Ilxan was both an architect of the EBÜK regime and a product of it. Above all he was ambitious, and saw his main chance in the Russian liberating forces, going over to them early in the Turkestani phase of the Second Great War, once it became clear that the Chinese would be hard pressed to keep the Russians out of Turkestan. His loyalty to the Russians was repaid by high position, and he managed to stage the death of Bolat Nurjan-ulı, his main rival for power, in an "accident" in the Altaı mountains. The way was then clear for him to become the leader of all Turkestan after the Russian takeover.

From the Russian perspective, Jalan's loyalty to the SNOR was evident and made him a good candidate to become a puppet leader. Some, however, questioned Jalan's willingness to do what he was told; the White Council wanted someone who would rule Turkestan according to their will. Jalan Ilxan wanted to rule for his own good. He managed to persuade enough people that he would be no threat to Russian interests, however, that he was made the new Turkestani leader after the Russian takeover.

He cultivated a "man of the people" image, often seen in a very simple Russian-style military uniform in the pretence that he was "just a simple soldier", but in actuality his public persona was at odds with his fiery temper and autocratic manner. Bolat Nurjan-ulı was not the first to be killed in his pursuit of power; while Ilxan, he periodically purged his government's inner circle of all those who were too dangerous or too incompetent. It was a fine line to walk, and unfortunately the purges and violence became a pattern followed by all his Snorist successors.

One of the things characterising the rule of Jalan Quyrat-ulı Ilxan was his predilection for massive public works projects. Some of these were useful (the Turkestan Rail Network, for example) while others were less so. His palace and other monumental architecture projects fall into this latter category. Jalan's SNOR backers were happy that he should busy his people with this sort of public works program which benefitted virtually no-one, and encouraged him in his pet project. Some of the top Russian architects were put at his disposal for the designs which sat rather gratingly against the blue and gold domes and spires of typical Central Asian architecture.

His palace, begun in 1952, was the first building over 5 stories tall in the earthquake-prone region of southern Turkestan. It is the only one of Jalan Ilxan's planned series of mammoth edifices that still survives to this day. 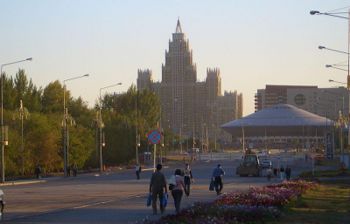 The Palace of the Nation, Buxara. The low dome in the foreground is a small Battlegame arena.

The Palace of the Nation ("Elniņ Sarayı"), as its original official name was (though most people just called it "The Palace", or "The Ilxan"), is a Russian-designed skyscraper 39 stories tall, built in the "National Slavic" or "Vissarionovist" style. Jalan brought in Russian architects and engineers to construct his huge edifice, as nothing like it had been seen in Central Asia before. Indeed, at 151m tall, it dwarfed everything else in the city by a staggering margin.

As well as being Jalan Ilxan's personal palace, it incorporated the government council chambers, offices of several key ministries and the EBÜK party headquarters.

Jalan Ilxan planned that there should be at least seven of these great monolithic buildings scattered throughout his state; a "Seven Brothers" Turkestani counterpart to the Russian "Seven Sisters" of St. Petersburg and Moscow. However, of these buildings, only four were ever completed, and all of those except the Palace of the Nation have since fallen to earthquakes.