Buxara (sometimes spelled "Bukhara") is the capital city of Turkestan. It is also the capital of the Province of Üzbekistan, and together with the city of Almalıq has the status of Urban Aymaq, meaning a large metropolitan Aymaq (subdivision of a Province) administered on a Provincial level.

The city is one of the most ancient of all the Silk Road cities; the city itself is at least 2,500 years old, and settlements have existed in the area for at least twice that long. Buxara is home to many Turkestani national heritage sites, including the ancient citadel known as the Ark that appears on the city seal along with the Turkestan Shrike.

As well as being an ancient city rich in historical architecture, Buxara is also a modern metropolis, served by excellent tram and local rail systems, and incorporating all the features of a thriving modern city.

Buxara was an important trading hub along the ancient Silk Road, and a major crossroads not only for traders but for religious, cultural and scientific knowledge. Islam, Zoroastrianism, Assyrian Christianity and Manesianity all have major centres within the city, and in the mediaeval period, several noted philosophers and astronomers such as Avicenna and al-Buxari made their homes in the city.

For much of its history, Buxara fell within the ambit of the Persian Empire and its sphere of influence. Mostly, though, the Persians in Central Asia were somewhat absentee landlords; for a long time the Central Asian region had little to no strategic value, so the Shahs were content to ignore the area, with just a nominal acknowledgement of Persian overlordship.

By the 1700s, Buxara was a more or less independent city-state, and had achieved dominance over its local rivals Samarqand and Xıva so that the Emirs of Buxara were de facto Over-Xans of an area stretching from Ürgänj to Samarqand.

In the late 18th Century, the Russian Empire annexed the city-state of Buxara, and the Emir became subject to the Car ("Tsar", Turkestani and Uygur romanisation) of Russia.

In 1916, Mahmud Ğulam Xan Emir was one of the main commanders of the Basmaçı uprising against Russian rule that won independence for Turkestan, and after the death of Ibrahim Enver and the League of Nations-brokered peace agreement in 1922, he became the first host, or Enver, of the Qurultaı. During the Qurultaı period, the official capital rotated from year to year depending on which local Xan or leader was hosting and chairing the meetings. However, Buxara was always an important city due to the prestige of its ruling Emir, and became a kind of de facto capital even when non-Buxarans were hosting the Qurultaı. 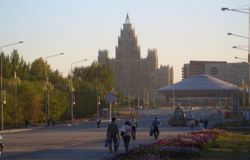 The Palace of the Nation

After the Snorist takeover of 1948, Buxara became the official capital city of Turkestan. It was one of the cities most extensively rebuilt by Jalan Quyrat-ulı Ilxan, but Jalan Ilxan at least had the sense not to destroy any of the really important architectural sites of the city. His new architecture sat uneasily beside the blue domes and tiled walls of traditional Central Asian building styles, and many of the most monstrous have since been destroyed in earthquakes. 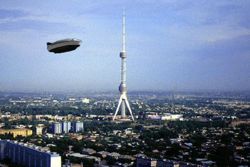 Today, the city is a thriving, cosmopolitan modern metropolis, the seat of both the Turkestani national and Üzbekistani provincial governments. It is an Urban Aymaq (large metropolitan area administered on a Provincial level) despite being part of Üzbekistan Vıloyat.

Buxara is served by excellent public transport, including trams, local rail, trolleybuses and regular buses. Its combined tram, rail and trolleybus terminal is known as the Spiderweb because of the number of rails and overhead cables coming into it. The Spiderweb has become something of a destination in its own right, as well as being a travel hub.

Buxara's primary aerodrome is the Ibrahim Enver International Aerodrome located to the north of the city. Autogiros act as fast shuttles between the main aerodrome, two secondary aerodromes and several giroports within the city; the three aerodromes are also linked to the local rail network.

Major tourist sites in and around Buxara include: