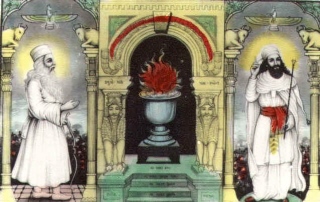 Zoroastrianism is the indigenous religion of Persia, and is the state religion in that country. It remains the dominant religion of the Persian people, though after Arabian incursions in the 8th century and following, Islam has taken second place, with Christianity (especially the ancient Assyrian branch) and Manesianity trailing in modern Persia. Zoroastrianism is also found in Central Asia, parts of western India, South Africa and England.

See Avesta, a site devoted to presenting information about Zoroastrianism for more information. Read the Gathas, Zoroastrian scripture, at this site.