Xıva is a small city on the western edge of Üzbekistan Province, located on the Amu Darya river.

Xıva was once a powerful Xanate within Central Asia, and before that, the capital of a state known as Xwarazm. Prior to the rise of Russian influence in Turkestan during the XVIII and XIX Centuries, however, the Xanate of Xıva came under the domination of Buxara. It remained nominally independent, however, until the state was annexed by Russia.

The Government of National Unity

Under the Snorists, Xıva became a centre for film-making in Central Asia. The original studios were created to service Russian period dramas set in Central Asia, in order to make on-location filming easier. Over time, the original studios grew, and the first Turkestani film company, the Xan-Täņri Film Company, was founded. The Xan-Täņri and Üç Yıldız companies are the largest survivors from that period; initially there were no less than 22 separate film companies, from Buxara Motion Pictures to Golden Eagle Productions. Most of these fell by the wayside in the ensuing years, but 5 remain.

Following the dissolution of the Government of National Unity, Xıva was subjected to something of an economic decline. The annual Xıva Film Festival was cancelled due to lack of money between 1990 and 1999, but in the millennium, the Festival was re-started and has become once again a great source of income for the city.

Xıva's economy is mostly tied up in tourism and the film industry. The city has several Silk Road and Timurid architectural sites, which are tourist destinations in their own right, and also has the tourist industry associated with its film industry.

Today, Xıva is most famous as a centre of film-making in Turkestan. Several of the country's most active film studios and production companies are located here, notably the Xan-Täņri and Üç Yıldız film companies.

Aside from the film industry, Xıva is a fairly small town, and would not otherwise be that significant. However, its involvement with film-making means that the city is much more cosmopolitan than it might otherwise be. It is also a significant tourist destination. 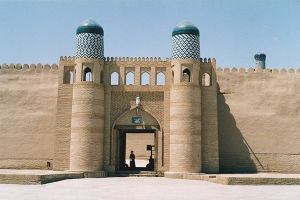 Gate of the Içan Qala fortress