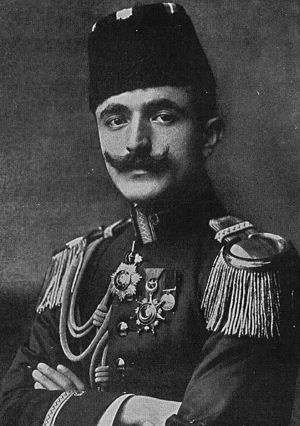 Ibrahim Enver was a Turkish general who was Minister of War of that nation until the close of the First Great War. He was a noted pan-Turkist and is one of Turkestan's national heroes.

In 1918 he was dismissed from his post in accordance with the peace treaty that the Ottoman Empire was forced to sign. He arrived in Turkestan later that year, ostensibly to negotiate a settlement to the ongoing revolt in Turkestan, which would have resulted in the maintenance of Russian sovereignty in the region, but a greater autonomy for the Central Asian peoples. However, upon arrival he immediately abandoned any pretence of neutrality and set about organising and training the fighters of the Basmaçı uprising.

He quickly became a crucial agent of cooperation between the diverse Basmaçı groups, establishing a permanent revolutionary council in the central city of Buxara. By mid-1919, the situation was such that even those groups who would not speak to each other would talk to him, and as they fought together, Enver was able to forge the beginnings of Turkestani unity. Some measure of neutrality, if not actual cooperation, had already been achieved between the Muslim Basmaçı leader Mahmud Ğulam Xan and the Assyrian Mar Addaıjan II, and Enver was able to build on this and forge a unity of purpose that would long outlive him.

As he had been a general before he was a government minister, Enver knew how to fight a war. Under his leadership the Basmaçı became a real fighting force, and because of the way they were able to work together, even the full might of the Russian Imperial Army was hard pressed to gain back much ground in the short window between the end of the First Great War and the beginning of the Russian Civil War. Central Asian unity was something the Russians had never had to deal with before, and both they and the Turkestanis themselves found out that it was a potent force.

Enver was killed in a Russian surprise counterattack on the city of Yası in 1921. He was so respected by the Turkestanis that his death was one of the deciding factors in the decision not to continue the war to try to liberate all of Qazaqstan.

The rotating position of Host/Chairman of the National Qurultaı became known as the "Enver" in his honour and memory.

Today, Enver is one of the greatest national heroes of Turkestan, with monuments to him all over the country and numerous parks, public buildings and other facilities named after him. Among these are the Ibrahim Enver International Aerodrome in Buxara, and the Ibrahim Enver Military Academy in Yası.