Following the Russian piecemeal annexation of Qazaqstan and Turkestan over the 18th and 19th Centuries, the Russians were not kindly overlords. Much blood had been shed in the conquest, on both sides, and the region quickly became a hotbed of discontent. The relocation of Russian peasants into the region, especially into the steppes of the nomadic peoples, became a flash-point, with Qazaqs and other nomads complaining that all the best grazing land was being given to the Russians. Russian colonial administrators continually put the needs of the Russian peasant immigrants over those of their neighbours, and generally felt that "honest Russian peasants" could make more effective use of the land by farming it than nomads could by grazing it.

In the settled cities of Turkestan, Russian hostility to local customs and religions, combined with the setting aside of ancient traditional ways and leaders in favour of foreign Russian ways and often clueless Russian administrators, were the root causes of the uprising.

The First Great War only increased locals' resentment of Tsarist Russian rule. Taxation was increased, Turkestanis were ordered to make "donations" of supplies toward the war effort or work on the farms of Russian peasants who had gone off to war, and several Russian administrators redoubled their efforts to assimilate the indigenous population.

The proximate cause of the uprising was a 1916 ukase issued by the Tsar, ordering the conscription of every able-bodied Qazaq and Turkestani to either serve in the army or in forced labour brigades. Up to this point, the locals had tried to ignore the fact that Russia was at war with Ottoman Turkey, which had been a long-time friend of Central Asia, but the conscription order brought this conflict of interest to the fore. Pan-Turkist sympathies were high among intellectuals in the region, and the suddenness of the order combined with long-standing resentments to set off revolts throughout the region.

These revolutionaries became known to the Russians as "Basmaçı", a Turkic word meaning "Bandits", though they themselves referred to those in the uprising as "Vatançı" ("pertaining to the homeland"). In an ironic twist, it was the Russians' name that stuck; indeed, was taken up with sardonic glee by some of the rebels. Among the leaders were the former Emir of Buxara Mahmud Ğulam Xan (a Muslim) and Mar Addaıjan II (the Assyrian Metropolitan of Samarqand). In a historic council in Andıjan in 1917, the two agreed to pool their resources to defeat the Russians; though in practice this cooperation was more words than deeds. 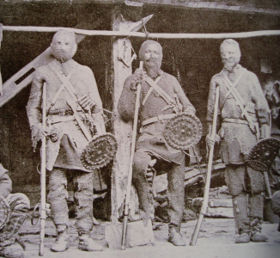 The Russian focus on their ongoing war in the West enabled the Vatançı to reclaim large amounts of land from the Russian colonial forces remaining in the area. The uprisings were most violent in the areas where Russian rule had been most oppressive, notably the Jetisu (Semirech'e) and Xiva areas. Many Russians in these regions lost their lives at the hands of angry mobs. However, these situations were the extreme; in most areas the revolts were more organised and less indiscriminate. By the end of the First Great War in 1918, most of Turkestan and the Qazaq steppe were under Basmaçı control.

However, with the end of the war, the Russians had, for a brief window, more forces to devote to the pacification of Turkestan and the quelling of the Basmaçı. In the window between the end of the First Great War and the start of the Russian Civil War, several regiments of Russian troops were dispatched to the region.

It was at this point, too, that the former Ottoman war minister Ibrahım Enver arrived in the region. Ostensibly, he had been sent into the region to try to end the revolt by negotiation and conciliation with the Basmaçı leaders; however, upon arrival he immediately dropped any pretence of this and joined the Basmaçı cause.

Enver re-organised the Basmaçı armies, and in a rather Macchiavellian deal, was able to arrange a supply of Chinese arms without mortgaging the new state into Chinese hands. It was Enver, also, who became something of a keystone in the cooperation between different Basmaçı groups, establishing a permanent council of the diverse groups in the city of Buxara in 1918; this laid the foundations of the new state and eventually became the government. Cooperation between different religious and ethnic groups was something the Russians had not really faced before in Central Asia, and it was to prove their downfall. The years 1919-1921 saw increasing Basmaçı victories, but the northern areas of the Qazaq steppe remained stubbornly in Russian hands, despite fierce fighting around the cities of Semipalatinsk and Ust-Kamenogorsk. In the final months of 1921, Ibrahim Enver himself was killed in a Russian counterattack on the city of Yası (*here's Turkistan, Kazakhstan); the attack was repulsed, but many lives on both sides were lost.

At this point, most of the Central Asian groups began to feel that it was no longer their struggle. The Qazaqs still wanted the rest of their land, but even they were persuaded to negotiate a peace treaty once the word of Enver's death came out.