Tamğa (Üzbek: Toņbo; Qazaq: Taņba; Osmanlica: Tamga) refers to a Central Asian pseudo-heraldic clan symbol invented by the Turkic peoples of ancient Turkestan. Tamğas are abstract linear figures, sometimes stylised representations of physical objects (a recurved bow, a sword, the sun, etc); sometimes purely abstract designs. From the original Turkic inventors, tamğas spread to large parts of Eaurasia, and can be found in one form or another from Mongolia and northern Persia to Veneda and Hungary. 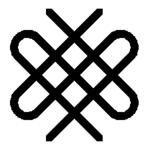 In ancient times, tamğas were used as brands to denote the livestock property of particular clans or tribes. Because of this original usage (which in Turkestan itself continued well into the Qurultaı period), all tamğas are monochromatic; unlike Western heraldry, colour plays no role in the tamğa's design.

A development of tamğas as clan symbols occurred as warriors of a clan began to paint their shields with the clan tamğa. Colour, however, was not prescribed, and could vary considerably from warrior to warrior.

In the period before Turkestan achieved independence in 1922, the use of tamğas was quite unsystematic. The people of a particular chan would know their own tamğa, those of their immediate neighbours, and maybe one or two more. In the Qurultaı period, the citizenry were suddenly much more mobile – sending delegations to Qurultaı sports competitions and festivities all over the country. It was quickly realised that some way was needed to keep track of the many tamğas in use and bring some order to the mix.

To this end, the national Registry of Tamğas was created. Its officials (called tamğaçıs) at first committed to memory the different tamğas of the nation, Turkestan at that time still being at least partially an oral culture, but with the success of the Qurultaı's Literacy Committee, official lists began to be made and kept.

The expansion of new administrative units (Aymaqs and Vılayats (provinces)) under the Government of National Unity prompted a dramatic growth in the number of officially-registered tamğas, as every Province, Aymaq and City administration was granted their own new official tamğa. The role of the tamğaçı almost exactly paralleled the Western Herald's role: granting new official tamğas, regulating the use of those established, and documenting past and present usage of the devices.

The decision to expand the use of tamğas as heraldic-like devices was perhaps a natural one for the Qurultaı, but was somewhat unusual for the Government of National Unity and its normal slavishly pro-Russian stance. However, it was possibly felt that Russian-type Western heraldry was just too alien for Central Asia; in any event, tamğas were expanded from a purely clan/tribe insignia to a more general one.

Unlike Western coats of arms, tamğas have never been, except in the most exceptional circumstances (eg Ilxans and certain other extremely distinguished persons), personal insignia. They belong to collective bodies: a clan, a tribe, a city, an aymaq, a province. They are still largely abstract, monochrome, linear figures, but many cities' official seals and/or flags are heavily based on their registered tamğa, and either the seal or the tamğa is required to appear on official paperwork of the body it is registered to.

One of the things marking the incorporation of a new city in Turkestan even today is the making of an official tamğa. In these modern times, the national body of tamğaçıs will decide on its form, in consultation with the new city's administration. Then an official branding iron (often plated in gold or silver) will be created in the requisite form and presented to the city administration in the incorporation ceremony. The official tamğa iron will then be kept on display at the city's administrative centre.

In addition to the modern use of actual tamğas, many Turkestani corporate logos have tamğa-like qualities, often being similar abstract linear or linear-like figures.