"Qaraqalpağıstan" means "Land of the Black Hat (People)". Its people are visually similar to Qazaqs, but their culture is a sedentary, sart one, not a nomadic culture as the Qazaqs.

Qaraqalpağıstan is the only one of the six Vıloyatlar (Provinces) of Turkestan currently having a female governor. Qarlığaş Berik-qızı is considered something of an anomaly in the rather male-dominated Keņes (Turkestani parliament), but has proven herself quite a capable politician.

Like all 6 Provinces, Qaraqalpağıstan is divided into Aymaqs. As most of the land not directly adjacent to the Amu Darya and Sır Darya rivers is desert, these tend to be larger than some of the other Provinces' constituent Aymaqs. 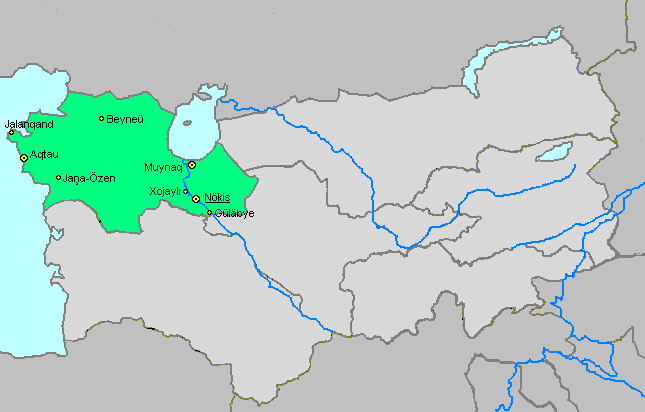 Map showing the location of Qaraqalpağıstan in Turkestan and its main cities.

Qaraqalpağıstan's economy mostly revolves around fishing in the Aral and Caspian Seas, and also mining and petroleum industries. The Province is the least populous of the six Vıloyatlar of Turkestan, because so much of the area is desert.

The Qaraqalpaqs are one of the sart peoples of Turkestan; traditionally, they were settled fishermen and farmers of the Aral and Caspian Sea areas. The province has been called a "Sart Qazaqstan", and to a certain extent, this is true. Qazaqs and Qaraqalpaqs share much of their language in common, and their style of decoration and ornamentation as seen in their national dress is practically identical. Even other Turkestanis sometimes struggle to tell Qazaqs and Qaraqalpaqs apart; the black Qalpaq hat traditionally worn by Qaraqalpaq men is the best clue to their precise ethnicity.