DESCRIPTION ON HOW THE SUB-NATIONAL ENTITIY IS GOVERNED

Like all of the Vılayattar (Provinces) of Turkestan, Kırğızstan is subdivided into Aymaqs. The south-eastern section of the province (including the city of Qaşgar) was added in 1997, following the Qaşgar War from 1991-1994. The area was formerly part of Uyguristan, but was majority Kırğız, and in 1991 voted to secede and join Turkestan. In 1997, following the peace settlement, the former Uygur province of Qaşgar was divided between Kırğızstan and Tajikistan. 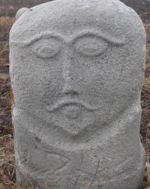 Kırğızstan has not had a huge role in world history, nor even in the history of Turkestan. Due to its mountainous nature, the area has historically been difficult to conquer and even more difficult to hold. The Russian annexation of Turkestan in the XVIII and XIX Centuries gave the Kırğız nominal Russian overlords, but Imperial tax collectors had a tendency to disappear in the high mountains, or not to find anyone to tax.

Confusingly, in the Tsarist period, the Qazaqs were known to the Russians as "Kirghiz", and the Kırğız themselves were called "Kara-Kirghiz" or "Mountain Kirghiz".

In the Qurultaı period, Kırğızstan was famous as the home of the noted wind-power developer Qunqasıım Baı.

One of the features of the landscape of Kırğızstan is the prevalence of carved stone men holding cups. Known to the Kırğız as Balbal, and to the Russians as Stone Babas (due to their resemblance to a Russian grandmother with a headscarf), these carvings are actually ancient Assyrian Christian grave markers. Their prevalence in Kırğızstan and southeastern Qazaqstan are mute testimony to the influence of the Assyrian Church in the region since ancient times. 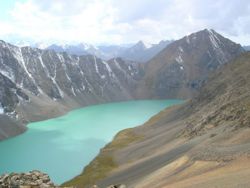 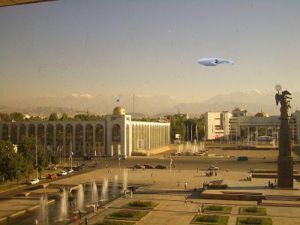 Most of Kırğızstan is extremely mountainous, with population centres crowded into the valleys. Lakes Issıq Köl and Ala Köl are important bodies of water. The highest mountain is Jeņiş Çoqışı ("Victory Peak"). The provincial capital Bişkek is the third largest city in Turkestan. 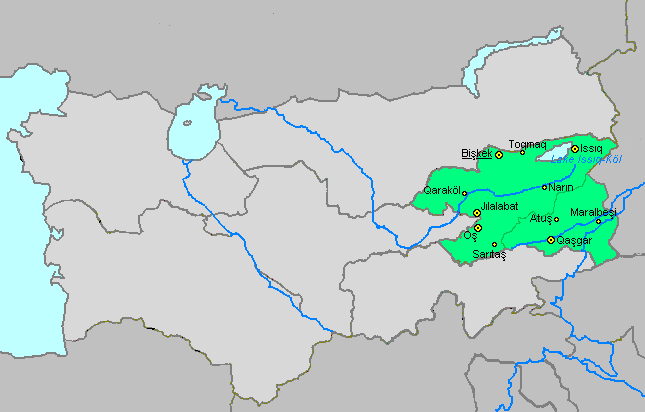 Map showing the location of Kırğızstan within Turkestan and its major cities.

Kırğızstan gets a lot of its income from eco-tourism and adventure-type tourism in the mountains. The Kırğız Ala Too (Ala Tau) Mountains are full of Qaraqal sheep, snow leopards, bears and wolves, and the higher mountains are a Mecca for climbers and winter sports enthusiasts.

Aside from this, the Kırğız economy is based around mining and pastoral agriculture, including the wool trade. The Uygur city of Qaşgar is a major centre of sericulture, and the Ferğana valley city of Oş, with its large Üzbek population, is a centre of fruit-growing and other agricultural business. 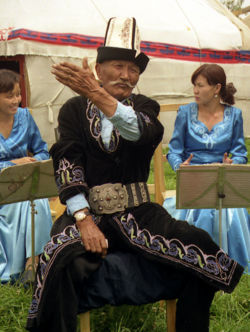 The Kırğız are one of the traditionally nomadic groups of Turkestan, typically spending the summer months in the high mountain pastures (Jayloo) and wintering in the valleys. Modern Kırğızstan is a lot more sedentary, like most of Turkestan, but nomadism still plays an important role in defining Kırğız culture.

Yurts can still be seen dotting the mountain Jayloos in the summer time, each with their obligatory wind turbine and television antenna; in this way the Kırğız combine their traditional way of life with modern technology in one seamless whole.

One of the cornerstones of Kırğız culture is the oral tradition of epic storytelling. In particular, the Manas epic is seen as the pinnacle of the oral tradition, and storytellers who have memorised the entire epic are known as Manasçı. Manasçı who know all three portions of the epic (the tales of Manas, his son Semetei, and his grandson Seytek) are known as Great Manasçı.

Achieving the title of Great Manasçı is considered a high honour; the highest accolade in Kırğız oral culture.