Qaşgar is a city which is currently in Turkestan, but has formerly been in Uyguristan, and before that, was part of the Chinese Empire. It is one of the larger cities of Turkestan, and is notable not only for its history, but for its large Uygur minority. It lies east of the Tyan Şan Mountains and west of the fearsome Taklamakan desert. 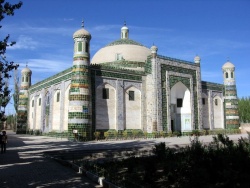 Qaşgar has been notable from ancient times as a trading centre and important city. From the China site, it is located at the convergence of the northern and southern routes around the Taklamakan, and from the west and south, it is on the routes to the Turğut Pass and the Karakoram Highway, and thus is an important stopping-point on the roads across the Tyan Şan and Karakoram mountain ranges.

To the ancient Chinese, the city was known as Sulei or Shu-le; it has also been known as Kasia, Cascar and Sorak.

It was an important city of the Kushan Empire and has been at various times independent, part of China, or part of other empires in the region.

More recently, the city was the capital of the de facto independent Uygur Kingdom in the XIX Century under Yaqub Beğ, before it was reabsorbed into the rising Empire of China under the Qing Dynasty.

In this period, the Uygur population of the city and its surrounding area was intentionally diluted by the Chinese overlords, with many Kırğiz and Tajiks being forcibly resettled in the area to subvert the determinedly Uygur nature of the city and curb nationalist revolt. Urumqi was made the capital of Xinjiang Province, and the city's importance was downgraded.

By the Central Asian War phase of the Second Great War/Great Oriental War, Qaşgar's population was largely ethnically Han, Kırğız and Tajik, and the Uygurs were a minority in their own capital. Even the independence of Uyguristan under the pro-SNOR nationalist Tokuz Okuz regime did little to change this; the Tokuz Okuz' power base was in Ğulja, Xotan and Ürümçi. It did, however, cause considerable disquiet among the non-Uygur majority of the city and region's populace.

This disquiet erupted into actual unrest following the collapse of the SNOR and the withdrawal of the Russian troops stationed in the satellite states back to Russia. In Uyguristan's post-Snorist experiment with representative democracy, Kırğız and Tajik candidates swept the board, promising the secession of the Qaşgaria region in order to join Turkestan.

The post-Snorist Uygur government's refusal to acknowledge these victories sparked the Qaşgar War in 1991-1994 between Turkestan and Uyguristan. The end result of this was the Treaty of Barnaul, ratified in 1997, which transferred the province to Turkestan but gave all of its inhabitants dual Turkestani-Uygur citizenship.

Since that time, there has been a quiet passive resistance campaign among Uygurs, orchestrated largely by the Kashgaria Party, aiming for the reversion of the historically Uygur city to full Uyguristan sovereignty. 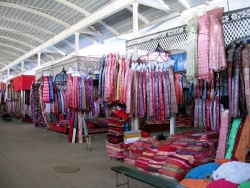 Qaşgar is historically a centre of trade and a nexus of several trade routes. Mercantile trade is still an important aspect of the local economy, and the Bars Hıpırbazar food retail chain is based here.

Sericulture and its associated textile industry is a growing sidebar to the local economy, particularly in the Central Asian Atlas silk market.

There is also a small tourist industry. 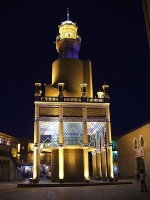