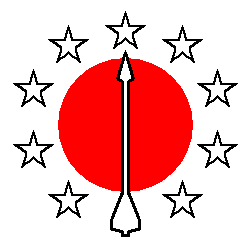 The Tokuz Okuz were the nationalist regime in Uyguristan from 1949-1990. The name "Tokuz Okuz" (Uygur: "Nine Clans") refers to the nine traditional tribal groups of the Uygur nation. Following the downfall of the SNOR the party was officially banned; in actuality it merely changed its name and continued to function.

When the Russian forces liberated Uyguristan in 1949, they found a native Uygur population who welcomed them with open arms. This was in contrast to Turkestan, liberated the year before, where people were a good deal less than ecstatic at the prospect of having Russian overlords again.

The Han Chinese minority had definitely held the upper hand during the period in which Uyguristan was an Imperial province, even to the extent of outlawing the traditional name for the region, East Turkestan, in favour of the Chinese Xinjiang ("New Territory"). Uygur culture had been under increasing pressure, especially towards the end when the tide began to turn against the Chinese state.

The Tokuz Okuz began life as an underground Uygur cultural resistance movement during the Chinese Imperial years. As the Great Oriental War progressed and life became harder for the non-Han minorities under Chinese rule, the Tokuz Okuz came out more into the open and began to actively fight against the Chinese presence in their homeland. And when the Russian forces invaded Xinjiang in the closing months of 1948, they openly sided with the White Army.

After their experiences in Turkestan, the welcome with which the Uygurs greeted the Russian liberators was almost overwhelming. Most Han Chinese that were able to leave did so, the remainder kept their heads down in the heady days following the Imperial capitulation in Xinjiang.

The White Army installed the Tokuz Okuz as the new ruling regime in Xinjiang. After some discussion between the Russians and the Uygurs, it was suggested that the name East Turkestan not be used for the new nation. The Russians felt that this too strongly emphasised their commonality with Turkestan, a state that had been little but trouble all the time it had been a Russian possession. However, to the Uygurs, they simply stated that the name sounded too much like a province of their large Western neighbour. The new name of Uyguristan was agreed upon.

The Uygur nationalists of the Tokuz Okuz were so happy to be out from under the thumb of the Chinese Empire that Russian propagandists were able to make great inroads into popular consciousness, reinforcing the idea that "Russian=good, Chinese=bad". Uygur nationalism was impregnated with Snorist ideology to the extent that local State-sponsored ethnologists began to suggest that the Turkic peoples, and especially the Uygurs, purest of the Turks, were an offshoot of the Slavic race.

Uygurs adopted this notion wholesale. Turkestanis largely viewed the idea as a piece of Russian propaganda.

Following the breakup of CMAEC and the downfall of the Russian SNOR regime, the Tokuz Okuz was officially disbanded. In reality, the Tokuz Okuz regime simply changed its name and added to itself the trappings of a political party. The resulting People's Party of Uyguristan has ruled the country since, holding periodic "elections" in order to maintain an illusion of legitimacy.