Qazaqstan is the second most populous province of Turkestan, after Üzbekistan, and is the leading province of those with traditionally nomadic populations. 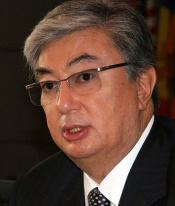 Like all the Provinces of Turkestan, Qazaqstan has a Governor, or Vılaya, who not only heads the Provincial government but also has is an ex officio member of the Parlament of Turkestan. The current Governor is Qasımjomart Toğaı-ulı, a Qazaq of the Great Horde, from the city of Kegen in the far east of the Province.

Qazaqstan, like all of the six provinces of Turkestan, is further subdivided into Aymaqs. Aymaqs are roughly equivalent to Russian volosts or raions, and actually comprise the main administrative level of Turkestani subnational government. Provinces exist primarily as a referent to help delineate the main ethnic groups of Turkestan. The Provincial governors, however, do have the right to sit in the national parliament, as well as heading up the (smallish) provincial administrations.

Of particular interest is the Almalıq Urban Aymaq, which, because of its population, is administered more as if it were a province.

Prior to the Russian annexation of the Qazaq steppe in the 1700s-1800s, (and afterwards) the Qazaq people were subdivided into three Jüz ("Hordes"): the Great Horde in the Southeast, the Middle Horde in the Northeast and the Little Horde in the West. Each Horde was ruled by its own Xan (sometimes written "Khan"), but periodically, depending on the personal power of the respective incumbents, one of those would emerge as de facto Over-Xan ("Qağan" is the Turkic term, but at the time of annexation the title had not been used for centuries. 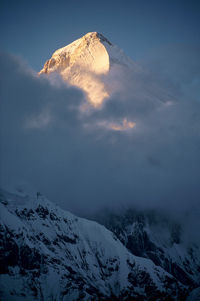 Most of Qazaqstan province is steppe; however, the south-east of the province rises sharply into the Ala Tau and Tyan Şan mountain ranges, culminating in the Xan-Täņiri mountain, which is the highest point in the province. The city of Almalıq sits at the foot of the Tyan Şan/Ala Tau, on the edge of the steppe.

Further to the west, the great Sır Darya river winds through the steppe on its way to the Aral Sea. 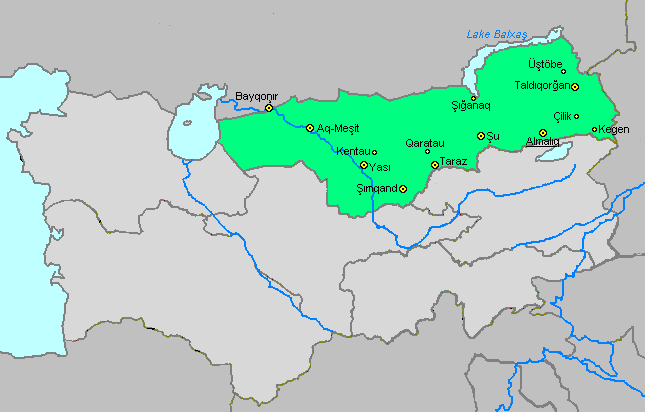 Map showing the location of Qazaqstan in Turkestan and its main cities.

Most of Qazaqstan is steppeland, suitable for grazing sheep and cattle rather than for crop agriculture. The traditional way of life of the Qazaq people is as nomadic livestock farmers, and this is still an important cultural undercurrent, but no longer one of the primary economic driving forces of the Province. Today, the land is often more valuable for the wealth under it (in terms of minerals and hydrocarbons) or over it (Qazaqstan plays host to one of the largest wind farms in the world); mining, petrochemicals and wind generation are all important industries, and there is also manufacturing. Among others, the Yoltaı Motors corporate headquarters is located in the city of Şu. 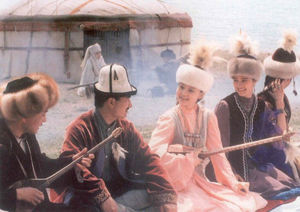 Qazaqs are the most numerous of the Central Asian Turkic peoples, if the population of Russian Qazaqstan is taken into consideration,but the Qazaqs of the Russian republic are somewhat different from those in Turkestan: more Russified, less in touch with their nomadic past, but also in some ways more cosmopolitan.

Turkestani Qazaqs are probably those who feel the "incompleteness"of Turkestan the most readily; even their flag is a statement saying "We are not complete without our Northern brethren". Qazaqs are more likely than others to be pan-Turkic, at least to the extent of reunification of the two Qazaqstans.

The Qazaq people are a traditionally nomadic sheep-herding culture, and even though most Qazaqs are now sedentary or semi-sedentary, the nomadic way of life and its associated traditions still play a prominent part in Qazaq identity.

Some of the chief popular art forms in Qazaq culture are poetry and singing. Whereas Üzbeks like to get up from the table and dance, Qazaqs will spend considerable time after a meal passing around the Dombra and having a sing-along. Spontaneous poets (called Aqın) improvise verse back and forth in a contest called an Aytıs. The goal is to praise yourself, your clan and your village and insult the other Aqın's in as witty, eloquent and poetic a way as you can. The winner is proclaimed by general acclamation. Turkestanis are for the most part generous sportsmen, and the Aytıs is almost sacred; failure to acknowledge a "hit" is extremely rare.

The Qazaq language is the second most widely-spoken language of Turkestan. It is mutually understandable with both Qaraqalpaq and Kırğız, though these languages are less so with each other. Qaraqalpaqs and Kırğız both understand Qazaqs more readily than each other.