Tajikistan is the most southerly of the six Provinces (Vıloyat/Vılayat) of Turkestan, and is the only one with a majority non-Turkic population (The Tajik people speak a language closely related to Dari Persian). It is mostly very mountainous, and contains the highest point in Turkestan.

DESCRIPTION ON HOW THE SUB-NATIONAL ENTITIY IS GOVERNED 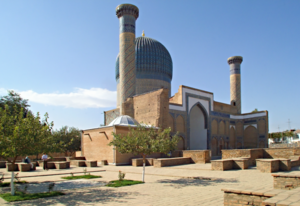 Tajiks have long been non-Turks in a Turkic-dominated Central Asia. Their very name Tajik means not Turkic, and in the early days of the Qurultaı the term "tajik" was used of any non-Turkic people, including Russians, Tocharians and Chinese. The Tajiks objected to this, however, and this usage was dropped, though it can still be seen in documents of the period.

The Tajik city of Samarqand was the capital city of the Emir Timur, and contains his mausoleum and many of the great public buildings erected in his time to this day.

Later on, Tajikistan was a de facto independent province of Persia until it was conquered by Russia in the late 1700s and early 1800s. 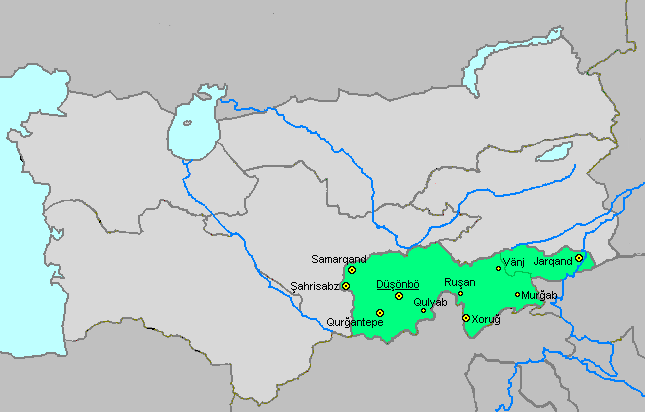 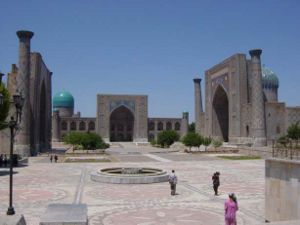 Due to its mountainous terrain, Tajikistan is one of the poorest of the six Provinces. Most of its wealth comes from carpet-making (hence the carpet-like design of the flag), though there are also mining, and forestry industries. The Province also gains a substantal amount of income from tourism, especially to the ancient Silk Road city of Samarqand, which was Timur's capital city and houses his tomb, as well as the famed Registan square.

Unlike their Zoroastrian Persian neighbours, the Tajiks have a typically Turkestani mix of religions. Many Tajiks are, in fact Christians of the Assyrian branch of the faith. Others are Muslims or Manesians, as well as a number of Zoroastrians. This distinguishes the Tajiks from the strongly Zoroastrian empire of Persia to the southwest, in spite of the close commonality of their language and ethnicity.

The city of Samarqand is the largest in Tajikistan, and is home to the third Assyrian Metropolitan See of Turkestan.

Tajik is a completely different language to all the other official languages of Turkestan, which are Turkic in origin, members of the Turkic-Altaic language family. Tajik is closely related to Dari Persian, and is thus a member of the Indo-Iranian family. There has been some mutual influencing of the two groups, however, and Turkic languages (particularly those of the Chaghatai family) contain numerous words of Persian origin, while Tajik is enriched by a number of Turkic words, particularly livestock terminology and recent technology words.

Due to its non-Turkic population, Tajiks sometimes feel increasingly out of place in a nation in which pan-Turkism is becoming a growing political trend. This has led to the growth of a number of disparate seperatist groups. The two largest are the Alliance of Light, which favours incorporation of Tajikistan into the Persian Empire, and the Pamir Liberation Party which promotes the idea of an independent Tajikistan.