DESCRIPTION ON HOW THE SUB-NATIONAL ENTITY IS GOVERNED

The Turcoman people are one of the traditionally nomadic ethnic groups of Turkestan, and have played only a limited role on the world stage, especially in the period prior to the first Russian annexation of the northern Central Asia region.

The Russian conquering force got quite bogged down in Türkümänistan, as the Turcomans are fierce fighters. This trait also proved its worth in the Basmaçı Revolt, when Turkestan was fighting for its independence. 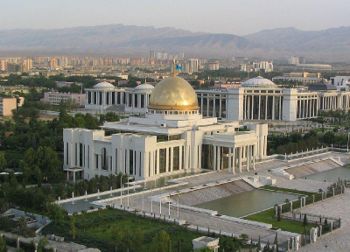 Most of Turcomanistan is arid steppe, semi-desert or outright desert, especially towards the west and the Caspian Sea coast. 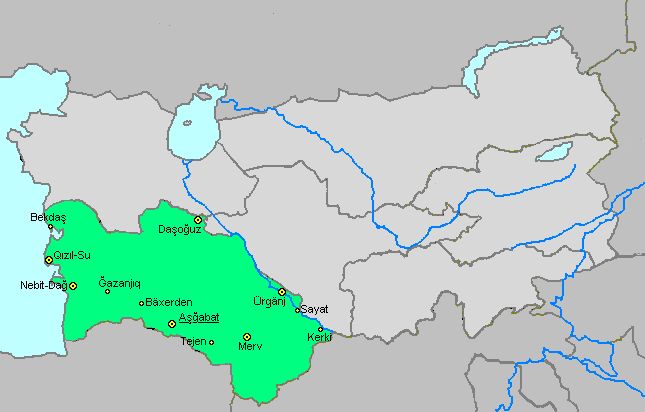 Location of Türkümänistan within Turkestan, with major cities.

Horse breeding and its associated crafts are one of the traditional pillars of Turcomanistan's economy; the others being livestock-raising and trade. In the modern Province, however, these are a smaller part of the local economy.

The ports on the Caspian Sea are home to Turkestan's tiny ship-building industry, as well as being centres of oil production and refining. Natural gas and mineral ores are also found in Turcomanistan, and these mining industries also constitute large parts of the province's economy.

In addition, because of the high percentage of Turcomans serving in the military, the province's economy reflects this, with the industries of several aymaqs geared to supporting local military bases - especially the large Guards naval base close to Nebit-Dağ.

The semi-wild herds of Bactrian camels in the Qızıl-Qum (see Culture below) are the focus of several local ecotourism firms. 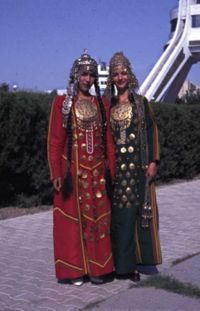 Turcomanistan is probably the most traditional and conservative of the six provinces of Turkestan, and it is here that you are most likely to see people wearing traditional costume as a matter of course, rather than just on special occasions. The Turcomans were a nomadic, livestock-raising people, and even though they are now mostly settled, their traditional ways still retain a considerable hold on the people.

Horsemanship is still considered a prized skill, especially for young men, and almost everyone who has the means can ride at least a little, and many are riders of considerable prowess. In addition, the Turcomans are regionally famous for their horse breeding. The Turcoman Horse Breeding Centre in Merv has gone to great lengths to preserve the traditional horse breeds of Turkestan and Central Asia, and pride of place is given to the traditional Turcoman breeds, the Turkmen and Axal-Teke horses.

Partly because of their national love affair with horsemanship, the Turcomans are also notorious in Turkestan as terrible drivers. All nomads have a bit of a reputation in this area, but the Turcomans are considered to be the worst of the lot. This is at least in part because Turcomans seem to subconsciously expect from their cars the same crash-evading instincts that a horse possesses.

As well as horses, Turcomanistan is also home to numbers of Bactrian camels. Most of these are domestic animals, but there are several managed herds of semi-wild Bactrian camels in the Qızıl-Qum desert region.