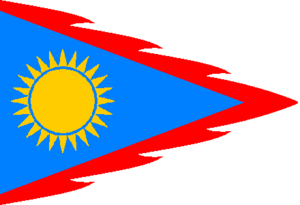 Turkestan has 3 armed services: Army, Air Force and Guards. However, these three services work very closely together and some observers think they are better categorised as three arms of a single joint service. They share a unified ranking system and permit inter-service personnel transfers in certain circumstances. The Turkestani military has operated in this way almost from its inception in 1919, certainly long before the concept of a joint command became "fashionable" in military circles.

The Army is considered the senior military service. Though smaller than the Guards, it has a larger budget due to its more extensive equipment requirements. Mobility has its price, and although the Air Force (or occasionally one of the Guards' ships) is used for strategic transportation, the Army's "mobile strike force" nature means that it needs a lot more armoured personnel carriers, self-propelled guns and auxiliary equipment (mine-clearers, bridgelaying vehicles and the like) than the more static Turkestani Guards (see below).

The Army of Turkestan is a highly mobile force that functions in both first-strike and strategic reserve roles. It consists almost entirely of mechanised formations: tanks, armoured vehicles, self-mobile artillery (both conventional and espingol) etc. Their normal role is to go in, take the ground and hold it long enough to deploy the Guards to hold it, before moving on to the next target.

Some of these functions (particularly marine/naval aviation) are not often the province of the Air Force, but in Turkestani military operations it is not unusual for the three services to work closely together, with Air Force air carriers supporting Guards fleet actions or Army ground oprerations.

In particular, the attack autogiros that in most military traditions would be part of the Army are manned by the Turkestani Air Force. And while the Guards maintain some aircraft, these are almost exclusively short-range, ground-launched anti-air fighters or interceptors. The Air Force has these too, of course, but anything longer-ranged or designed to be carried aloft and launched from an airship is considered the province of the Air Force exclusively.

The Air Force are also used to being employed as long-range strategic transport for Army (and ocassionally Guards) personnel and equipment, and they maintain a substantial fleet of large heavy-transport airships for this purpose, as well as a few ekranoplans stationed in the Caspian Sea ports of Qızıl-Su and Aqtau.

The Guards are the largest of the three services, and their role is complementary to both the Army and the Air Force. Whereas the Army and Air Force cover the long-range strike/mobility roles of a unified operation, the Guards' mandate is both broad and simple: defence.

Anything involving the defence of a fixed position, a border, an area of territory etc., falls under the Guards' mandate. They are the ones who garrison most of the military bases around the borders of the country; they are the ones who crew the small Caspian and Aral Sea fleets, and they also maintain a force of short-range air interceptors for air defence. Guards tanks are typically heavier and slower than Army tanks, but with bigger guns and thicker armour. The Genghis heavy variant of the Timur MBT is typical in this regard. They also use a very limited number of APCs, IFVs and self-propelled guns compared to the Army.

The roundel above with the red ring is used to distinguish Guards aviation from regular Air Force. Guards ships fly the triangular Turkestani Battle Flag as their naval flag. By Turkestani tradition it is flown from the masthead, rather than one of the more usual shipboard military flag positions: prow (jack) or stern (ensign). However, since the opening of the Eurasia Ship Canal, the Guards have adopted a naval ensign and jack for use in extra-Mazandaran deployments, in keeping with the general maritime tradition of stern-flown naval insignia. The jack is also used by the Turkestani Merchant Marine

The Turkestani "Battle Flag" (displayed at the head of this article) is the flag flown from military bases of all three services, and carried before marching troops in large military parades. The flammule-edged design is one whose ancestry traces back to the traditional Turko-Mongol war banners such as the gyrfalcon flag carried by Genghis Khan.

The three services share a unified ranking system (Turkestan is perhaps the only country in the world where a naval vessel might be commanded by a Lieutenant-Colonel), the ranks of which are a mix of Russian-derived, Persian, Turkish and ancient Turko-Mongol: 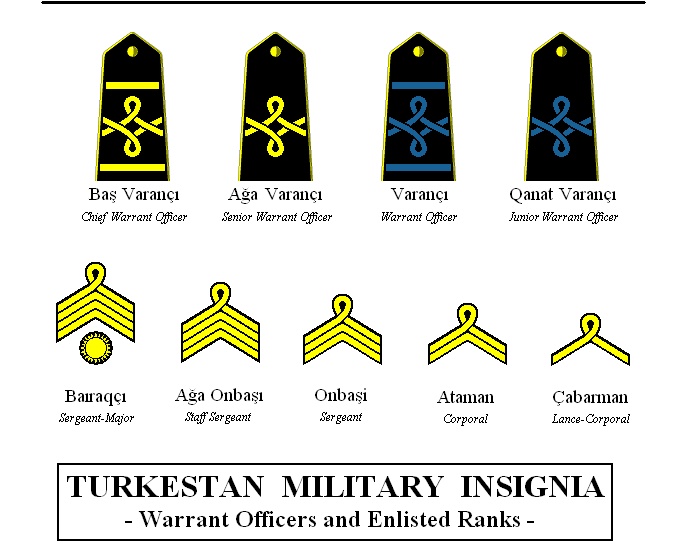 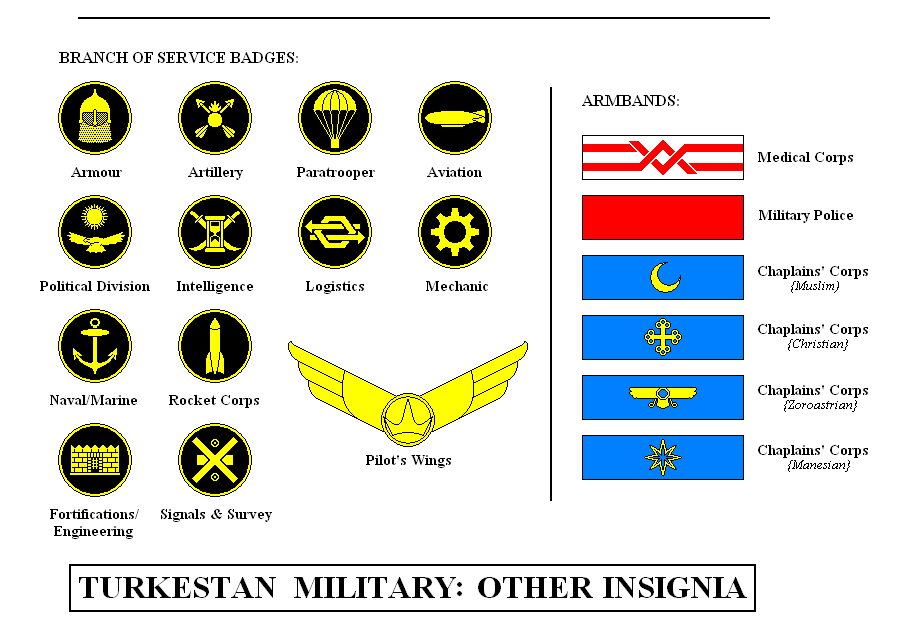 Due to its close links with Russia in the snorist period, most of Turkestan's military equipment is Russian-made or Russian-designed and built locally under license. In particular, Turkestan's airships, armoured vehicles and firearms are almost all Russian in origin; however, the nation has produced some very capable military aeroplanes.

The T-9 Boran jet fighter is currently grabbing all of the attention, but the main workhorse fighter of the Turkestani Air Force and Guards air division is the propeller-driven T-5 Çagaltai ("Hobby", Falco subbuteo), a single-engined fighter able to be ground-launched or carried by airship (see image).

Until the fall of the SNOR and the end of CMAEC, Russian political muscle and Riga Pact treaties forbade Turkestan from exporting military hardware, even to other CMAEC nations, but its domestic aircraft certainly proved themselves against the Russian planes flown by Uyguristan during the 1991-1994 war with that country over the Uygur province of Qaşgar.

In 1994, the Turkestani government announced an ambitious plan for the modernisation and re-equipping of its armed forces with hardware of Turkestani design and build, beginning with four "Key National Defence Projects": Main Battle Tank, Jet Fighter, Armoured Personnel Carrier and Air Frigate.

Turkestani tactical doctrine sees the three armed services not as independent forces, but as three arms of a composite whole, functioning together and interdependent.

When attacking, typical tactical doctrine is for the Army to move in, supported by the Air Force, and take out the enemy's forces, and then for the Guards to follow the Army into the new area and hold it, while the Army and Air Force move on to the next target.

When defending, typically the Guards will hold a perimeter on the ground and in the air with their short-range interceptors, supported by Air Force strikes against attacking ground forces, and the Army will function as a mobile strategic reserve.

Naval operations are typically a Guards affair, as they have the ships. However, even then, the Army and Air Force will usually be the main attack force, but their base of operations will be a Guards ship, not a military installation.

This kind of tactical combination of forces requires a lot of coordination and understanding of more than just one service's role. For this reason, the Turkestani military encourages its flag officers (Qolbaşı and above) to spend some time cross-training with at least one of the other services. Furthermore, a Sardar may not be promoted to Tarxan until they have served at least one year in each branch of the armed forces.