Keņes is the name given to the parliament of Turkestan. It was established in 1951 by Jalan Quyrat-ulı to replace the old Qurultaı government, and during the rule of the Government of National Unity regime it was firmly subservient to the Ilxanate. Indeed, during the period of Snorist rule the Keņes' exact role and composition was not fixed, being determined by each successive Ilxan.

This all changed with the fall of the Government of National Unity, and in the 1990 Constitutional Convention the role and composition of the Keņes were fixed and written into the Constitution.

The 588 Keņesçis come from one of three groups:

This system has the effect of actively promoting small parties being able to gain one or two Keņesçis through the Yüz Orun, while simultaneously making it difficult for parties to grow very large (the Progressive Party is probably the largest any one party can get, and is probably at its maximum growth). The system's institution at the fall of the Government of National Unity in 1990 is considered to be one of the key events marking Turkestan's transition from a single-party Snorist dictatorship to a representational parliamentary system and elected monarchy.

Needless to say, Turkestani ballot forms are quite complex. First of all there are the ballots for the 4 aymağal representatives. This part of the ballot is completed using a system similar to *here*'s "Australian ballot" system: One's top and bottom 3 preferences are ranked in order, and each candidate is awarded a certain number of points (positive for scores in the top 3 rankings, negative for bottom 3 positions) based on the order in which they are ranked. The candidate with the highest total score is elected.

The aymağal representatives do not have separate electoral districts within their aymaq, and a candidate may stand for more than one representative seat, if their party (or they themselves) can put together enough financial backing to campaign. In practice, this means that the "Australian" ballot must be completed four times, and the top four scorers are elected.

After this on the ballot form comes the ballot for the Hundred Seats. The Hundred Seats are apportioned to the political parties by a system of proportional representation, and each party is free to select their own candidate Keņesçi; the electorate votes for a party, and that party selects their man (or woman) according to pre-set rules. This part of the ballot, then, amounts to a list of the registered political parties of Turkestan, with check boxes. This part of the election is a straight vote; the voter must select one party to receive his vote. Turkestan currently has at least 40 registered political groups, so most people can find one that is fairly close to their views.

The Head of Government and chairman of the Keņes is called the Keņesbaşı. The Keņesbaşı is chosen from among the elected Keņesçis by the Ilxan, who also has the power of veto over the Keņesbaşı's cabinet appointments. The current Ilxan, Sultan Qasım-ulı, has seldom used this power of veto, setting a tradition that most people hope will continue.

The cabinet, or "Inner Keņes", is made up of the heads of the various ministries and government departments. The Keņesbaşı makes appointments to this circle from the elected Keņes, and each of his appointments must be ratified by the Ilxan.

The Ilxan has the right to address the Keņes on high-profile issues, but does not have a vote in its proceedings. The Turkestani tradition of deference to authority lends considerable weight to the Ilxan's right of address, however, and the Ilxan's resultant influence over his government is far greater than most other monarchs'. Turkestan stops short of outright dictatorship by the expedient of requiring that a two thirds majority of the Keņes request their monarch's input on a subject; thus the right of address is used mostly to break parliamentary deadlocks.

The Turkestani election cycle runs 1991-1997-2003-2009... There is no set date for elections, however; the Inner Keņes and the Ilxan together set a date for the elections, which must by law be called for a date within the relevant calendar year.

The 2009 election was held on 17th November. The results were as follows:

Major changes include the radical growth of the Partıya Turan and lesser growth of the Blue Party, the Wolf Brotherhood gaining their first seat ever and the poor showings by the Liberal Alliance and the Home and Hearth Party, both of which have usually performed better than they did. 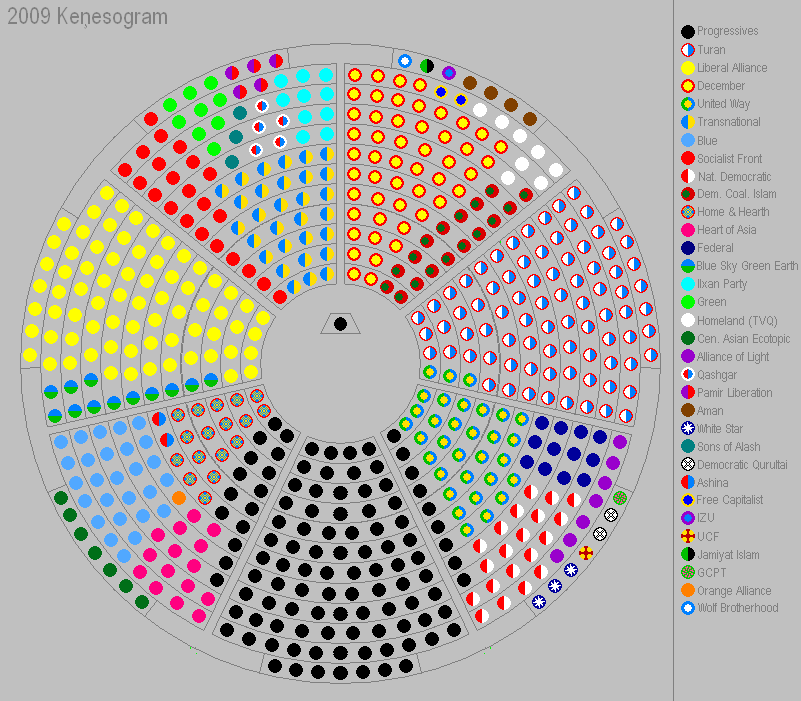 "Keņesogram": Diagrammatic representation of seat allotments in the 2009 elections. The spot within the box in the centre shows the allegiance of the current Keņesbaşı and does not count towards the 588 seats.