The calendar currently in use in Turkestan and Uyguristan is a blending of three systems. It is mostly a Western-type Gregorian calendar, but it also contains elements of the Persian and Chinese calendar systems.

The names of the months are Persian in origin:

However, the numbering of days within the months follows the standard Gregorian pattern, and the new year begins on the first of March, not the equinox as was traditional in the Persian calendar. The New Year holiday remains on the 21st/22nd, however.)

Numbering of years also follows the Gregorian calendar brought by the Russians, but there is a two month lag between the Western and Central Asian calendars due to the differing start dates. 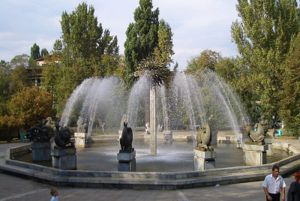 In addition, there is a Chinese-derived animal cycle system of naming the years which runs in parallel with the Gregorian year numbers. There are some differences from the usual Chinese system, replacing some of the animals with more Central Asian ones: