Buddhism is a path of practice and spiritual development leading to Insight into the true nature of life. Buddhist practices such as meditation are means of changing oneself in order to develop the qualities of awareness, kindness, and wisdom. The experience developed within the Buddhist tradition over thousands of years has created an incomparable resource for all those who wish to follow a path - a path which ultimately culminates in Enlightenment or Buddhahood.

Because Buddhism does not include the idea of worshipping a creator God, some people do not see it as a religion in the normal, Western sense. The basic tenets of Buddhist teaching are straightforward and practical: nothing is fixed or permanent; actions have consequences; change is possible. Thus Buddhism addresses itself to all people irrespective of race, nationality, or gender. It teaches practical methods (such as meditation) which enable people to realise and utilise its teachings in order to transform their experience, to be fully responsible for their lives and to develop the qualities of Wisdom and Compassion.

There are around 350 million Buddhists and a growing number of them are Westerners. They follow many different forms of Buddhism, but all traditions are characterised by non-violence, lack of dogma, tolerance of differences, and, usually, by the practice of meditation. 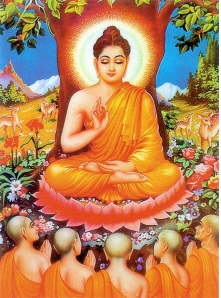