The Partıya Turan are the rational, respectable face of Turkestani Pan-Turkism. While they are by no means as radical as the Wolf Brotherhood and some of the other pan-Turkist groups, they have a much broader support base and are a growing power in Turkestani politics.

The party’s name derives from the Turan, the ideology of unity between the Uralo-Altaic peoples, including Turkic, Mongolic and Ugro-Finnic groups. The Partıya Turan, however, are not pan-Turanian in the accepted sense, but are certainly pan-Turkic; the idea of the Turan being a fairly flexible one imbued with different levels of meaning by the different groups involved. 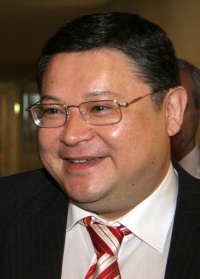 The Partıya Turan was founded in 1992; its current leader Marat Jandos-ulı is something of an outsider in the nepotistic circles of high-level Turkestani power politics. Despite, or perhaps because of this, he is a very popular political figure with the electorate, though rather less so in the inner corridors of power. In the last round of elections (2009), the party overtook the Liberal Alliance to become the second largest party represented in the Keņes after the Progressives, with 81 seats out of 588. This is a considerable increase over their previous showing of 55 seats, and shows the increasing influence of Pan-Turkism as a factor in Turkestani political life.

The Partıya Turan do not fit easily into a typical Western left-right political spectrum. In many ways, they appear right-of-centre: their views on immigration, desire to minimise bureaucracy and traditionalist stance on many social issues are typically right-wing; however, they maintain a strong commitment to social welfare programs and are more left-leaning as regards their economic agenda.