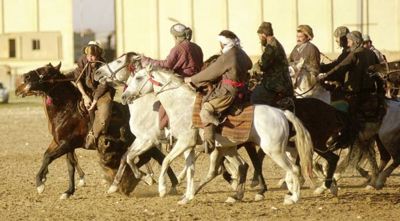 An amateur kökbörü match, out of uniform

Kökbörü is the national sport of Turkestan. It is an equestrian sport akin to Polo but played with a headless goat carcass instead of a ball.

The sport has various names among the several ethnic groups that play it. Kökbörü is its name in InterTurkic and several other Turkic languages. Qazaqs know the sport as Kökpär, Kırğız as Ulaq-Tartış, and Tajiks and citizens of the Moghul Realm know it as Buzkaşı. It is the same sport in each case, however, that has been played in Central Asia since time immemorial.

The National Kökbörü League is the body responsible for organising the sport in Turkestan. The League was first organised in the late 1930s, and with organisation came standards, uniforms, registered teams and schedules. The 1986 on-field death of a player due to a head injury resulted in the still-controversial introduction of padded helmets.

Most cities have Kökbörü teams, though not all are nationally-recognised by the League. The League splits the teams into four geographical Divisions for the initial season, then the top three teams in each Division enter the playoffs for the national championship.

The international competition take place every three years, in the year immediately preceding the World Games.

The following is a list of known national-level Kökbörü teams: