Tannu-Tuva is a small Russian republic in Central Asia, inhabited mostly by a Turkic people closely related to the neighbouring Altai and Khakas peoples. It is also an associate member of the Silk Road League.

Tannu-Tuva, like all the members of the Russian Federation, bears the title of "Republic". In Tuva's case, the government is largely oligarchic in nature, with two prominent clans passing the presidency back and forth between them and doling out the other ministries to their supporters.

The parliament of the Republic is known as the Khurul, and is a unicameral legislature-executive dominated by a strong presidency.

The Republic of Tannu-Tuva is located in the geographic centre of Asia. It is situated in the extreme south of Siberia, and constitutes an elevated, forested region in the east and a drier lowland plain in the west. There are numerous rivers flowing through the Republic, including the upper reaches of the mighty Yenisey, 5th longest river in the world. Most of the over 9000 rivers within the Republic's borders are tributary to the Yenisey.

Part of the south of the republic is a special ecotopic area which continues across the border into Mongolia. This area is jointly administered as a condominium by the Mongolian and Tuvan governments.

Tannu-Tuva is divided into 11 administrative districts, or Kojuunlar, plus another Kojuun-like area which comprises the Tuvin part of the special Ubsunur ecotopic condominium area. The Ubsunur (Uvs Nuur in Mongolian) area continues into Mongolia, but only the part considered to be in Tannu-Tuva is shown on the map: 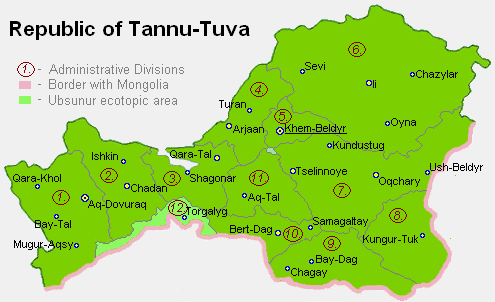 The earliest recorded inhabitants of Tannu-Tuva were the Scythians. Some of the earliest Scythian burial mounds have been excavated in the region around Arjaan. Later, the area was ruled by the Xiongnu (Huns), then the Göktürks, then the Uygur Khanate.

From the early XIII Century, the region of present-day Tannu-Tuva fell under the dominion of Mongolia, and was known as Tannu Uriankhai. It was in this period that Buddhism first came to the region, which was at that point largely Assyrian Christian and Tengriist. Buddhism would later displace Assyrian Christianity as the second largest religious group in the region.

In the XVIII Century, Tannu Uriankhai passed from Mongol control into the dominion of Qing China, where it remained until 1912. An agreement between China and Russia in the mid-XIX Century allowed limited Russian settlement in the region, and in 1911, during a period of unrest and uprising in China, the Russians began to foment separatism in Tannu Uriankhai.

In 1912, Russian troops entered the Tannu Uriankhai and proclaimed the Uriankhai Republic under Russian protection (and it is at this point that the POD occurs). The Republic remained nominally independent throughout the First Great War, though was subject to Russian overlordship.

Flag of the Tannu People's Republic

In 1919, the Uriankhai Republic was overrun by the Red Army, who proclaimed the Tannu People's Republic, with a Communist government under the leadership of a Russified Tuvan puppet ruler. This short-lived entity lasted only until 1921, however, when White Army counterattacks forced the Red Army to retreat into eastern Siberia, to what would become the Soviet Socialist Republic of Siberia.

At this point, the Uriankhai Republic was formally annexed by Russia, at the apparent request of a group of Tuvan authorities including High Lama Byyat Lopsang and Bishop Ondar-ool Orjaq. It is unclear whether this "request" was coerced or not; many historians suspect that it was, but others point out that the Tuvins had enjoyed better treatment and greater autonomy at the hands of the White forces than under the Bolsheviks.

Initially, the Tuvans were granted a remarkable degree of autonomy as the Uriankhai Krai. However, after the proclamation of the SNOR in 1923, it was only a matter of time before this would erode. Gradually, through the 1920s and 1930s, especially the 1930s, the degree of autonomy granted to the Tuvins became steadily less, until the founding of the various ethnic Governorates ("Guberniya").

In 1991, following the dissolution of the SNOR, the Tuvin Governorate proclaimed itself the Republic of Tannu-Tuva, a constituent of the Russian Federation.

The economy of Tannu-Tuva is mostly centred around mining. Economically-important mineral resources include coal, iron ore, gold, and cobalt. Formerly, the large asbestos deposits below ground were extensively tapped, leading to chronic health issues in some parts of the territory. The modern state has made the environmental clean-up of these areas a main priority in the years following the abolition of the SNOR, and only two cities have lingering problems.

Forestry is another source of income, particularly in the upland east of the country, as are the sawmills and wood-crafting trades that go along with it.

The other main source of income for the Republic is tourism. The Ubsunur wilderness area on the border with Mongolia is home to many rare species including the regionally iconic Snow Leopard, and several local ecotourism firms capitalise on this. The Ubsunur wilderness area actually crosses the border with Mongolia, and is administered as an ecotopic condominium area under joint Tuvan-Mongolian authority.

Tourists to Tannu-Tuva come mostly from Turkestan, and many Tannu-Tuvans now speak reasonable Qazaq or Üzbek in addition to their own languages.

Tannu-Tuva is over 75% ethnically Tuvin, the other 24.4% of the population being mostly ethnic Russians, but also some Mongols, Buryats and Qazaqs, as well as Ketic and Samoyedic peoples and a scattering of Slavs and other Europeans brought in by the Snorists – Czechs, Volga Germans and others. These last have mostly emigrated to other parts of the Russian Federation, either to their own republics or to autonomous districts within other federal republics. A linguistic distinction is made between "Tuvin" (pertaining to the eponymous ethnic group of the Republic) and "Tannu-Tuvan" (pertaining to all the inhabitants of the Republic, regardless of ethnicity). This last is derived from the ancient Mongol-Chinese name for the region, Tannu Uriankhai. "Tuvin" is also sometimes written "Tuvan". The government of Tannu-Tuva does not seem to exhibit a clear preference.

A group of Tuvans riding horses

Modern Tannu-Tuva is dominated by the Tuvan ethnic group, and their culture prevails in the Republic. This was not always the case, however, and in the Snorist era, Russian language and culture were fostered and promoted to the exclusion of the majority Tuvan culture. The Tuvin language is thus full of Russian loan-words, many of them Turkicised by exposure to the Tuvan majority, but just as many not. In addition, many more educated older Tuvans speak Russian as a first language, and had to re-learn their official mother tongue in order to maintain their social standing in the current order.

The Tuvin people are Turkic in origin, belonging to the Northern linguistic family which also included Khakas and Altai. Unlike their Altai neighbours, who are some of the most sedentary of all the Turkic peoples, the Tuvans were historically nomadic. Most Tuvans are now completely settled, with only a few continuing to practise semi-nomadism, but their nomadic roots run very close to the surface, and the cultural practices of nomadism are still very evident in their society.

Tuvins are famous for their throat singing, horsemanship and skill in hunting. Of old, the Tuvan people typically got a significant amount of their meat from hunting, as well as from herding, and many keep up the ancient traditions.

Tuvans are likely to be either (in order of likelihood): Tengriist, Buddhist (after the Mongolian tradition), or Christian (after the Assyrian tradition). A few are converts to Russian Orthodoxy or practise Burxanism, but this number is not large.

Tannu-Tuva is one of only a few places in the world where numbers of Buddhists and Christians rub shoulders with each other on more or less friendly terms. The two groups are both minorities compared to the Tengriist majority, and Tengriist thinking colours a lot of both Christian and Buddhist local religious expression.

Tannu-Tuva competes in most of the events of the Central Asian Games, and typically does well at the equestrian events, particularly the Three Day Race and Kökbörü, in Küräş (wrestling), and in the mounted shooting events.