Soğdo is the name given to the modern Turkestani script. It is an adaptation or descendent of the ancient Sogdian script which was used in the region, and is related to the Mongolian, Uygur and Manchu scripts.

One of the unique features of Soğdo is its capacity to be written horizontally in a right-to-left, top-to-bottom orientation, or rotated 90° and written vertically in a top-to-bottom, left-to-right orientation.

The Soğdo script was developed in the early Qurultaı period. Even before the Basmaçı Revolt, education and literacy reform were touted among the Turkestani intelligentsia as a means to greater self-determination, but it was not until after independence that the Qurultaı's Literacy Committee were able to push through a single script as a national standard.

The problem was not just illiteracy. Many people were illiterate, it is true, functionally if not completely, but a large part of the problem in Turkestan was that those who could read did so in such a bewildering array of scripts and writing systems that effective written communication was virtually impossible.

The scripts in use were all tied to the various religious groups: Arabic script was used by the Muslim community, Pahlavik script by Zoroastrians, Eastern Syriac script by the Assyrian Church and Cyrillic by the Russian Orthodox Church and those most influenced by Russia. To find a single script that everyone could use without it being "infidel writing" was a major challenge.

The Literacy Committee delved back in time and settled on developing a modern alphabet from the old Sogdian script. Thought was given to making an alphabet from the ancient Orxon runes that the Turkic people had used from ages past, but Orxon runes were sometimes used by Teņriists for their few religious writings and in ceremonies, so even they carried a religious dimension.

The Sogdian script, while a daughter of the Syriac scripts brought to Central Asia by Assyrian missionaries, was disused enough to have minimal religious associations. It was used as a template for developing a new script, with input from the Mongolian script that was still in use and the Uygur script that was being suppressed by the Chinese rulers of that territory. Extra letters were created to cover some of the particular sounds of Turkestani languages, for instance the θ of Türkümän.

The resulting script, known as Soğdo, is in use in Turkestan to this day. It is practically identical to the modern Uygur script, plus a few extra letters, but this is a result of a script reform in Uyguristan to bring it into line with the Soğdo script. 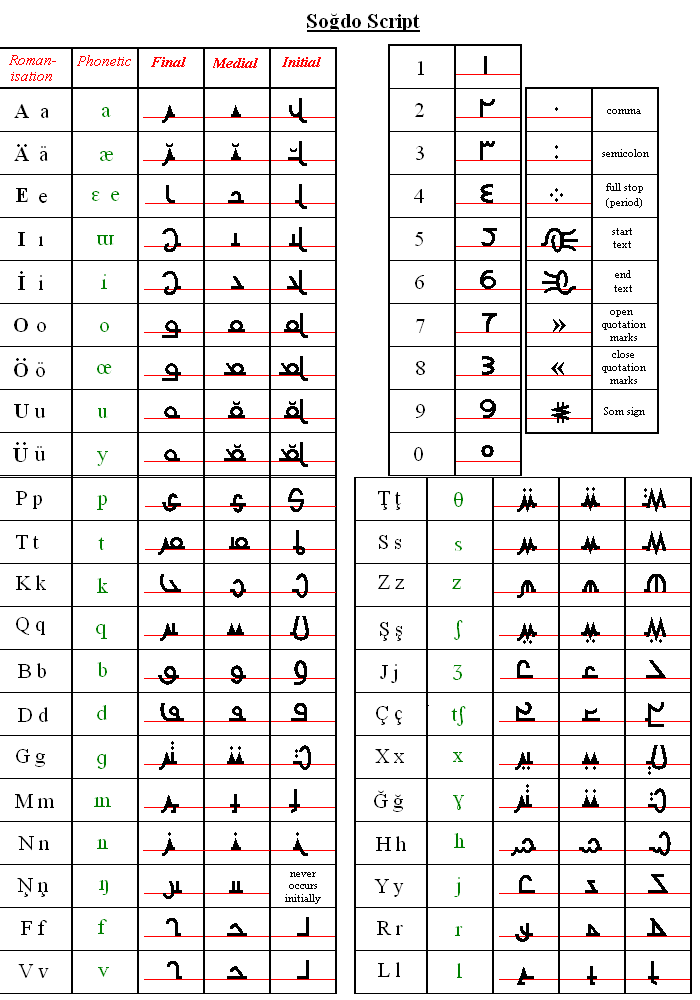 The "normal" orientation of Soğdo in Turkestan is in right-to-left lines arranged from the top of the page to the bottom. In Uyguristan, the usual orientation is rotated 90° to be arranged in vertical top-to-bottom columns beginning at the left-hand side of the page. Both orientations can be read without trouble by most people in the two nations.

Letters come in three forms, as with other Middle Eastern cursive scripts: an initial form, a medial form and a final form.

The Start Text and End Text characters are used at the beginning and end of longer passages of writing, such as a chapter of a book or a newspaper article, and are integral to the first and last words respectively of the passage.

The combinations of dots that are used as punctuation are not as comprehensive as Western punctuation marks, but Turkic languages include interrogative and exclamatory particles whose inclusion obviates the need for these marks. A dash or hyphen-like mark is used where a colon might be used in Western language contexts.