Yoltaı Motors was founded in 1967 as an offshoot of ÜKÜ Armaments' former Ground division (since operating independently as Jahangır Industries) to produce civilian automobiles both for export and for the domestic market.

As with many Turkestani manufacturing companies, Yoltaı initially made copies of Russian vehicles. Rumours abound that the first Yoltaı cars were not actually licensed copies of their Russian equivalents at all, and that extensive cosmetic modifications were made to hide this. According to the rumour, this is why early Yoltaıs have a practically identical chassis to Russian cars of a period 5-10 years previous, but the bodywork looks so different.

If this is the case, the Russian manufacturers seem to have been willing to either turn a blind eye or to approve the copying after the fact, perhaps because early Yoltaı cars were so poorly made that anyone who could afford it drove a Russian car anyway.

Yoltaıs' sole advantage was that they were cheap to buy – cheaper than anything else on the market, even the cheap Russian imports. The company's domestic production cars were the first to open the possibility of owning a car to more than just a select few.

Yoltaı began exporting cars to the West in the 1980s, opening their first Western dealership in Paris, France in 1981. For years, Yoltaı cars in the West were the undeniable worst on the road – unreliable, sluggish, and handling like drunken pigs – and became the butt of all kinds of jokes (in the "What do you call a Yoltaı on the top of a hill?" "-A miracle" vein).

The cars' image abroad was not helped by the appearance of the company logo. The logo features a horseshoe with 13 nails, placed in what in the West is an inverted position, points down. These are both symbols of bad luck in many Western countries, and few will forget the images of employees in that first Paris showroom refitting the maker's marque upside-down in the closing months of 1981.

The company logo as it appeared on cars destined for export to the West was changed in 1982 by inverting the horseshoe, however, it was kept in its original points-down orientation for the domestic market; this is right-side-up to Turkestani eyes. The thirteen nails remained in both versions.

This device did little to improve sales – Yoltaı cars had a reputation for being underpowered and unreliable relative to almost everything on the market. In fact, period Yoltaı automobiles were so inferior that even Turkestani government officials were wont to buy Russian-made cars and replace the Russian makers' marque with the Yoltaı brand, thus displaying their nationalist credentials while still being able to drive a halfway decent car. 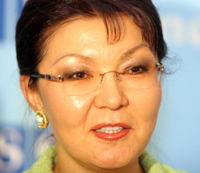 Recently, however, Yoltaı Motors has undergone a considerable rebranding effort under the leadership of its most recent CEO, the formidable Läzzät Säken-qızı Baı. Läzzät Baı is the first female CEO of a major Turkestani company, and acceded to the reins of power in 2003.

Under her leadership, the company has instituted a punitively rigorous quality program, and with the switchover of military aircraft to jet propulsion, she has hired former piston engine developers in an effort to boost perfomance and improve the internal workings of Yoltaı cars, also consulting with Western styling advisors to improve their outward appearance.

The program appears to be paying off, though there is still much progress to be made. The latest generation of Yoltaı cars is a vast improvement over anything the company has produced before, and they are more competitive with European and American models. Sales overseas continue to suffer from the company's blighted reputation, however, and it remains to be seen whether the company can offer anything not already being produced by more established firms.