Crimea, the country where Parra is spoken as a trade language, is a large peninsula in the Black Sea. Its climate is subtropical in the thin strip of southern coast, cool and fertile in the Crimean Mountains, and dry steppe in the large interior. Its population is a bewildering melting pot of Greeks, Turks, Mongolians, Crimean Goths, Crimean Tatars, Russians, Ukrainians, Armenians, Germans, and Yiddish-speaking Jews; not to mention Bulgarians, Cossacks, Italians, Roma, and Karaite, Kymchak and Romaiote Jews.

Crimea spent most of its history as a borderland. The south was connected to the world of the Mediterranean, the north to that of Central Asia. It has become a real cultural stew of some twenty different major languages and four major religious branches (Muslim, Christian, Jewish, and Pagan). It was the seat of an empire, the Crimean Khanate, for much of the Early Modern period. Since 1918 it has been an independent republic. Its language Parra evolved from Lingua Franca spoken by Western sailors. Italian merchants brought the language to the colonies that they controlled in Crimea from the 13th to the 15th centuries.

The Crimea was settled by a diverse range of peoples from different parts of the Mediterranean basin and Central Asia. Conquered by the Mongols in the 13th century, it later became the seat of the last splinter of the Mongol Empire, the Crimean Khanate. The khanate dominated the interior of medieval Crimea, while Italian colonies ruled the coast. This was the era that spawned Parra as a trade language. The expansion of the Ottoman Turks erased the colonies and made the khanate a vassal state. Later it came under Russian influence and was annexed in 1783.

The Russian Revolution of 1918 was more successful in Crimea than anywhere else in Europe, and for twenty years the country was independent as the Tauridian Socialist Republic. However, during the Second Great War it was occupied by Ukraine, Germany, and finally by Russia again. After the war, the Crimea remained an independent state only on paper, while it was ruled by a pro-Russian puppet government under the SNAC party, a local ally of the Russian SNOR. This government was overthrown in 1989.

For a much more complete version, see the History page.

A description of some of Crimea's cities, their cultures and traditions is located on a separate page.

North: Ukraine via the Isthmus of Perecop
West and South: Black Sea
East: Russia across the Crimean Bosporus

Crimea's cultural landscape is one of the most complex in Europe. Its location and geography are responsible for this diversity. Crimea's link to Pontic and Mediterranean civilization brought seafaring peoples from the south: Greeks, Romaniotes, Italians, Armenians, Georgians, and Turks. Through its link to the Eurasian steppes came many nomadic peoples: Scythians, Goths, Karaim, Tatars and Krymchaks, Mongols, Nogais, Roma, and finally Cossacks. The Russian Empire was not able to drive out this diverse population, but it did try to encourage settlers to immigrate whom they believed would be cooperative subjects; this is how Russians, Ukrainians, Germans, Bulgarians, Estonians, and even a few Latvians and Romanians came to the Crimea. The Circassians and Ashkenazi are in a different class; they came to Crimea to flee persecution elsewhere in the empire, knowing that here, the tsar's cruel ethnic policies were less strictly enforced.

The religious landscape is no less varied. Catholics and Orthodox and Protestants, multiple branches of Judaism, and distinctive Karaite, Mennonite, Romani and Tengriist traditions unique to the peninsula. Even European paganism can be found on the Crimea. Most of the Crimean Goths are now Orthodox Christians, but a number of them still maintain the worship of a holy tree 7428.

For a more detailed description of the Crimea's cultural mix, see the page on Population.

Crimea's national parliament is called the Rada. Choosing a name for the legislature in 1989 posed something of a challenge, since nearly every available term carried some kind of cultural baggage. Rada had been the name of the Ukrainian interwar legislature and was reinstated after 1989, and Crimea adopted this name. It is ultimately a Germanic word, cognate with the modern German and Gothic word Rat.

The Rada is a unicameral body. Naturally it is made up of dozens of tiny parties representing a gamut of ethnic and ideological constituencies. Most seats are chosen by proportional representation. A few token seats are reserved for representatives of the traditional mileti, the communities. The idea was to ensure representation to the smaller minority groups and to appease the outgoing SNAC government. Every government since the beginning of democracy has been a coalition.

Two notable parties have inpressive pedigrees. SNAC, which ruled the country between 1948 and 1989, was not outlawed and continues to participate. And the Menşevici, the party of the Soviet Republic, returned from exile in Munich and has been Crimea's largest left-wing party ever since.

A local mayor is called a console. This Parra term has been used officially since Soviet days.

Crimea's many communities have a long history of facing oppression of various kinds and taking care of their own members. The authoritarian regime of the latter 20th century intensified this culture, and it remains a defining feature of Crimean politics today. Crimeans expect their government to be corrupt and dysfunctional and have not yet fully adjusted to the idea of democratic rule, even after more than 20 years.

Crimea's primary divisions are the sixteen craju - districts or territories. These were created after a major overhaul of local government in the late 1990s, replacing the intentionally inefficient and convoluted system of the Snorist era. Each major city in the country is the center of a craj. Onlar, near the center of the steppe, is the only craj without a natural economic hub; the town was rather arbitrarily chosen to be the administrative center. Cities, towns, and local rural councils still retain robust powers in Crimea. The craju are: 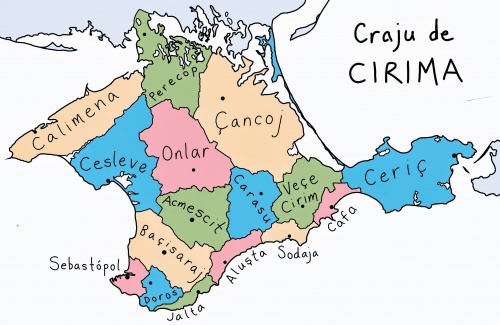 While the Russians never gave Crimea a flag, they did grant it a coat of arms to represent the Tsar's rule. It was gold with a two-headed imperial eagle, on whose breast was placed a smaller blue shield with a gold griffin within a border. The griffin goes back to antiquity as a Crimean symbol. It was used by Greek colonists and may have come from the Scythians before them. The Khans also made use of it.

The Soviet Republic modeled its flag on those of other communist states across Europe. It featured the hammer and sickle of the Russian Revolution plus the initials of the country in Russian and Tatar (TSR for inscrition in Russian, TSC for inscription in Crimean Tatar - Tavrida Sovet Cumhuriyeti).

The Snorist flag of Crimea was designed during the rule of the first Snorist leader, who emphasized the country's Russians, to the exclusion of other groups. It is in the pan-Slavic colors with a griffin and cross in the center.

Post-Snorist Crimea mainly repurposed old symbols in its quest to form a new national identity. It reinstated the old coat of arms from tsarist days, removing the imperial eagle but keeping the griffin. The octagram, Crimea's national tamga and the symbol on its modern-day flag, comes from a gate on the walls of Doros. As a city built by the Byzantines and important to the Goths and Kipchaks, its iconography filled the need for a unifying symbol to represent one land with many peoples. Probably it belongs on a host of flags, seals, roundels, and military uniforms that still need to be designed.

On the national flag, the octogram is placed on a tricolor of blue, green and red. The blue and red are simply taken from the Snorist flag. The green represents diversity and prosperity. The tricolor alone is used as a civil ensign at sea and sees some informal use on land as well.

For most of its history, Crimea's economy has rested on the productivity of its farmland and its usefulness as a shipping port for the Pontic Steppes. Its leading products are cereals, fruits, vegetables, wine, cattle and sheep. Crimea's industrial sector is largely devoted to processing all this food. In this country surrounded by water, fish and shellfish are important sectors as well.

The importance of Crimea's ports has fluctuated with geopolitics. When the entire region north of the Black Sea was united, whether under the Mongols or the Russians, the peninsula served as its natural front door. But when Ukraine and Crimea were separate from Russia (that is, 1919-1940 and 1989-present), Ukraine preferred to develop its own seaports rather than buy goods trans-shipped through Crimea. Russia's fragmentation since the fall of Snorism has worked to Crimea's favor, and it has continued to serve as a shipping center between Russia and the Bosporus. These all-important economic links with Russia and Turkey encouraged Crimea to join the Silk Road League and, more recently, the OASSA free-trade bloc. This joins Crimea's economy to those of Turkey and (it is hoped) a growing number of Russian republics. Both Sebastópol and Ceriç are bustling ports today.

Crimea's tourist industry has also always relied on connections to Russia, the Mediterranean climate of the southern coast being an attractive getaway for denizens of the cold Russian north. In recent decades the Ministry of Tourism has worked hard, not always successfully, to attract more Westerners. Ecotourism, focused more on the mountains than the seacoast, has been the biggest growth area since the early 90s.