The Silk Road League is primarily concerned with promoting harmony between its member nations based on the shared cultural heritage of the Turko-Mongolian and Central Asian peoples, and with the promotion of this heritage through cultural events both within the League's member states and beyond. One of its main functions is to oversee large cultural events like the Silk Road International Festival (an annual arts and musical festival) and the Central Asian Games (a triennial sporting fixture for the traditional sports of the region).

The full list of member states is as follows: 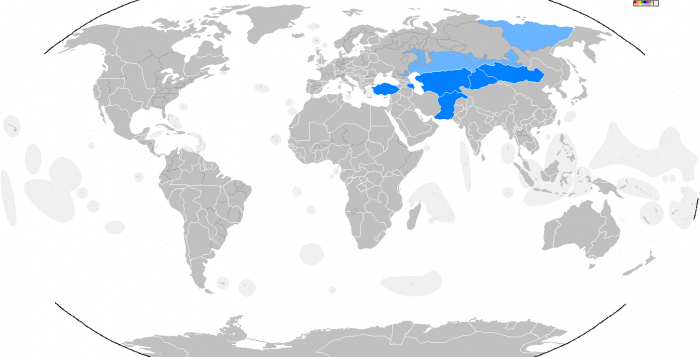 The Silk Road League was initially founded in 1969 as an international association comprising Turkestan, Uyguristan, Mongolia and Azerbaijan as full members, and the Tuvin and Buryat ethnic governorates as associate members. From the beginning, the founder states wanted Turkey to join, too, but Russian diplomatic efforts served to frustrate the extension beyond the CMAEC of an association which they themselves were no part of.

Eventually, someone high in the White Council decided that this association could be used to pull Turkey towards the SNOR, and Russian diplomatic frustration of Turkey's membership of the League was quietly dropped. Turkey joined the League as a full member in 1972, following the 1971 change of leadership in Russia and a shift towards the right in Turkey's internal political landscape. The Moghul National Realm followed in 1987. After the fall of the SNOR, several of the constituent republics of the Russian Federation joined the League. As a deference to their federal constituent status, the republic were made associate members rather than full members, but in reality there is little real difference in their status. It is largely a reflection of the limited autonomy that the first two associate members had under the SNOR

There has been talk for some time amongst the League members of beginning to turn the Silk Road League from a cultural association to a closer economic and political bloc. This might create more of a difference between the two classes of membership, but it is unclear at this time when or even whether the expected changes will materialise. Turkestan, Turkey, Buryatia, Qazaqstan and Tannu-Tuva are in favour of increased politico-economic ties; others, including the Moghul Realm, Uyguristan and Altai, are very hesitant about such a move.

Meanwhile, the Moghul Realm and the Tajik population of Turkestan are agitating that an invitation to join the League should be extended to Persia, and have the Silk Road League span the Turkic, Mongolian and Persian worlds. Persia has been notably silent on whether such an invitation would be welcomed.

On 3 February 2009, negotiations at the Qazaqstan-hosted annual SRL conference resulted in the proclamation of a voluntary Central Asian Free Trade Zone within the Silk Road League. Membership of the Zone was left voluntary, a sop to nations such as Uyguristan that feared being swamped by the more powerful economy of Turkestan, but several nations have already ratified the treaty establishing the Zone. The free trade area goes under the name of OASSA when distinction is needed between the SRL and the trade area. This is a Turkic-language acronym, standing for Orta Azıyalıq Satu-Savda Avdanı ("Central Asian Free Trading Zone"). 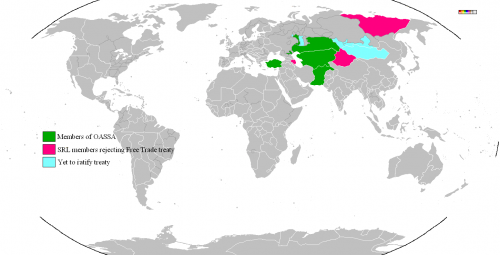 Many of the members of OASSA are also participants of the Russian Federation. Those states having this dual membership may trade freely with other OASSA members or with RF members without paying customs duties. Each participant is required to label their goods with country-of-origin labelling, so that it is clear that goods are being imported directly and not just passed through a middle man to avoid customs duty.

In late 2015, Crimea finally ratified the OASSA treaty, becoming its newest member and signaling an increasingly eastward, rather than a northward or westward, orientation to its foreign policy.