The Council for Mutual Assistance and Economic Cooperation (CMAEC) (in Russian: Совѣтъ Взаимопомощи и Экономическаго Сотрудненія, SVES) was an international organisation, founded in 1953 and liquidated in 1992. It consisted of the Russian Empire and its snorist satellite states. It had its seat in Kiev, Ukraine (then: Little Russia).

The CMAEC was Russia's response to successful international organisations such as the Commonwealth of Nations, the Scandinavian Realm, the Baltic League, and the European Federation. Its primary purpose was to serve as a framework for economic cooperation between Russia and its satellites. Initially, modest objectives of "exchanging experience" and providing "technical assistance" and other forms of "mutual aid" were extended to the development of an integrated set of economies based on a coordinated international pattern of production and investment. These ambitious goals were pursued through a broad spectrum of cooperative measures extending from monetary to technological relations.

Due to the overwhelming dominance of the Russian economy, the bulk of intro-CMAEC relations necessarily had the character of bilateral relations between snorist Russia and the smaller members of the organisation. Thus, the CMAEC provided Russia with an excellent means to keep the economies of the other countries under tight control, and redirect them to its own benefits. Especially during the 1970s and early 1980s, the CMAEC was essentially a vehicle for Russia's economic exploitation of its allies.

The CMAEC also had a military counterpart, the Riga Pact. 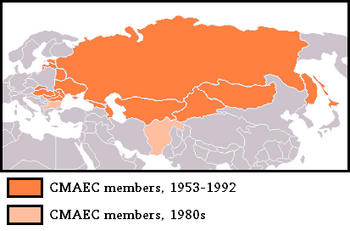 The founding membership in 1953 was:

The Moghul National Realm was a full member of the organisation between 1982 and 1987, Filipinas from 1972 to 1983, and Bulgaria became a full member in 1989. Over the decades, other countries have observed the sessions of the CMAEC as well, but never acquired full membership.

The CMAEC was liquidated after the fall of the SNOR regime in Russia and after its satellites had liberated itself from Russian dominance.