Italy covers the northen part of the Italian penninsula, from the Alps to the Papal States.

Italy is governed by an elected monarchy. All monarchs, Grand Dukes, Dukes and Archdukes may vote and stand for election as monarch of Italy. The Presidents of Liguria and the Marches as well as all the Metropolitan Dukes may vote but not be elected; and all the princes cannot vote but may be elected. The successor of a previous monarch may not be elected. The current queen of Italy, Luisa II of Ceva, has reigned since 1991. 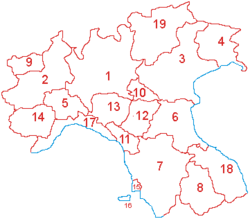 Italy consists of 25 small states in the northern third of the Italian peninsula. They include three kingdoms, five grand duchies, five duchies, three principalities, six metropolitan duchies, and a variety of "others", ranging from a Confederation to an Oligarchic Republic.

Italy and the Papal States

Apart from the Kingdom of Lombardy, all the Kingdoms, Grand Duchies, Archduchies, Duchies, and Principalities are hereditary monarchies. Lombardy is an elective kingdom whose monarchs are elected for life amongst the members of other Italian Royal Families. The current monarch of Lombardy is Beatrice of Ceva (who, ironically, will be unable to succeed her mother as Queen of Italy). The Oligarchic Republic of Liguria is a Presidential Republic, whose President is elected for a 10-year non-renewable term from among the members of the 48 noble families of Liguria. The Confederation of the Marches is a confederation of 152 cities, each governed by a hereditary knight. The office of President and the main offices of government rotate amongst the knights on an annual basis. Since 2000, women can inherit knighthoods, but cannot pass them on to their kindred.

A Kingdom formed by various ancient states which united in 1933 to form a constitutional monarchy. After the short-lived Roman Republic, the then-Republic of Lombardy, the Kingdom of Piedmont, the Kingdom of the Two Sicilies and the Papal States signed the Lateran Pact in 1929. After the collapse of the Republic of Lombardy due to ongoing corruption, regional unrest and the wishes of the people to restore its local monarchies, customs and traditions several political leaders met in Genoa and a new constitution was drawn for an elective constitutional monarchy. In 1933, 78% of the population approved the new constitution which still holds. In 1976 the Marches after a referendum requested to join the union. They were, at the time, a province of the Two Sicilies. In 1977 an official non-belligerent claim was made on that territory and in 1979 the Two Sicilies acquiesced in exchange for more benevolent commercial relations with a treaty signed in Capua. In 2002 Corsica made a similar request and in October 2002 the government made an official but non-beligerent claim on Corsica.

Italy composes the northern portion of the Italian peninsula. The northern provinces, especially Piedmont and its neighbors, are mountainous, containing the Italian Alps. The Alps change into the Apennine Mountains along the coast of Tuscany, but the terrain flattens out on the Adriatic coast. The Po River flows east out of the Alps, passing through Turin towards the Comacchio region on the Adriatic coast. At 652 kilometers long, the Po is Italy's longest river. The highest point in Italy is Monte Bianco, along the France-Piedmont border.

Italy has few natural resources and little arable land, so it imports much of its food and minerals. There are, however, significant natural gas reserves in the Po valley and offshore in the Adriatic. Italy does, however, have a large wine industry, one of the things for which Italy is most famous. Italy has a large manufacturing industry, mainly of clothing and luxury cars. Italy has a number of aerodromes to facilitate international travel, and many well-established land trade routes through the Alps. For a long time Italy has had a small but bustling air travel company called ArItalia, which has recently begun to expand to neighboring European countries as well, especially the Kingdom of Two Sicilies, the Papal States, Malta, and Helvetia.

Italy is part of the European Federation. Its currency thus subdivides in the same way that all EF currency does. The largest unit, a lira, subdivides into twenty soldi (singular soldo), which further subdivide into 240 denari (singular denaro).

See also: How to tell if you're Italian

Italy is an amalgam of many cultural standards, ranging from the placid Elbans to the daring mountaineers of Piedmont. As such, there is no standard Italian culture, with the situation varying greatly from member state to member state. However, there are two things that all Italians have in common: great pride in their home state and its culture, and great pride in Italy as a whole.

Italy is home to a large number of languages and/or dialects. Italian is the common language of the nation, a composite of various regional forms, especially Tuscan, Lombard, and Piedmontese. Italian is taught essentially as a second language to students, as most people speak one of the regional forms as their native language. Other prominent languages include Elbic, Lombard, Emiliano-Romagnolo, Piedmontese, Ligurian, Arpitan, Venetian, and Helvetian which are regionally official in their respective duchies, kingdoms and such.

The Italian populace is predominantly Roman Catholic, which is unsurprising given Italy's proximity to the Papal States. There are significant minorities of Dalmatian Catholics in the northeast, however, and Italy is noted for being tolerant of other faiths as well (although some would point out that such is basically a non-issue, given that more than 75% of Italy's population is Roman Catholic). In particular, Aosta, in the Northwest, is primarily Cathar (a small Gnostic-esque Christian sect, once considered heretical, now accepted by the Catholic church with a sigh).