The Kingdom of the Two Sicilies has as its head of state Charles VI of Aragon (locally, Carlo V d''e Dùie Sicilie), but the monarch spends most of his time in his home country, leaving the regular administration of the country to the parliament and Prime Minister.

The parliament of the Two Sicilies is a group of representatives elected from each of the country's four reggioni. The parliament currently consists of 64 representatives, 24 from Cartago, 25 from Nàpule, 9 from Sicilia, and 8 from Sardigna. Half of the parliament is reelected every three years so that in total any given representative may serve a total of six years in parliament. Every year, the parliament selects its Prime Minister, a member of the political party which controls a plurality of seats. If there is a tie, the tied parties alternate years, beginning with whichever party selected a Prime Minister most recently.

The Kingdom of the Two Sicilies is divided into four reggioni (regions, singular reggione):

The Kingdom of the Two Sicilies got its start on the island of Sicily, centered at Palermo. It was founded by the Norman de Hautvilles. Their influence and rule spread to the southern peninsula, south of the Holy See. After the Battle of Benevento (1266), the de Hautvilles moved their capital to lovely Naples.

After the uprising of 1282, the Sicilian Vespers, the island of Sicily became a dependency of Aragon, though it was still a kingdom under de Bourbon rule. The de Hautvilles ruling the mainland still claimed the island, of course, and also retained the name of Sicily for the mainland portion of their realm.

Reality caused this part to be generally called the Kingdom of Naples, however. De Hautville rule passed on to the de Bourbon house (who also ruled over the other Sicily) and back again. The kings of Naples had long been traditionally referred to as kings of the Two Sicilies regardless of house.

Eventually, though, the de Bourbon line on the island of Sicily died out, and the kingdom passed to direct Aragonese rule in 1409. In 1442, the kingdom of Naples likewise became an Aragonese dependency.

Sicily was conquered by France in 1798 along with Malta. Though Malta revolted with English help, the two Sicilies were reunited under the de Bourbon kings of Aragon, who allied themselves with Napoleon in typical fashion. After the Napoleonic Incident, the Two Sicilies continued on with no particular ties to France other than those of the Aragonese kings. There was no unification in 1861, so the Two Sicilies was not assumed by the new Kingdom of Italy, as *here*.

During GW1, there was a revolution which embroiled partisans from Naples, Umbria, the Patrimony, Tuscany, Romagna and Venetia who were dissatisfied with the current state of affairs in "Italy". In 1916, they announced the formation of the (short-lived) Roman Republic and made Rome their capital.

Naples was lost in 1918 to Sicilian forces; Venetia and Tuscany were liberated by Lombardy before 1921. The Republic held on to Romagna, eastern Florence (Lombard territory) and Abruzzi (Sicilian territory) until 1929. At the behest of the Pope who had escaped to Naples, Lombard, Sicilian and Dalmatian forces allied themselves with the remnants of the Pope's armies and at last brought an end to the Roman Republic.

In 1929, at the Lateran, a treaty was signed by which territory was exchanged for the help received in restoring the Holy See. Romagna became Lombard; the South Marches (north of Abruzzi) went to Sicily. Dalmatia was paid for its services.

A restored Carlo IV ruled until 1931, when he was succeeded by his daughter Maria Isabel I. An ardent reformer, Maria Isabel, in conjunction with local officials and politicians, began to take steps to turn the Two Sicilies into a constitutional monarchy, rather than the absolute monarchy which until then had been popularly perceived as little more than a colony of Barcelona. A constitution was rapidly adopted after her accession, providing for a prime minister, a Parliament, and other trappings of democracy which had long been enshrined in law in mainland Aragon and Riu de l'Argent. In addition, she also allowed both men and women to vote in elections, a highly progressive move for the time. For this reason, she is often referred to as "a Magna" (the Great) in the Two Sicilies, and it is her reforms that are often credited with avoiding Sicily befalling the same fate that Castile did in 1931. 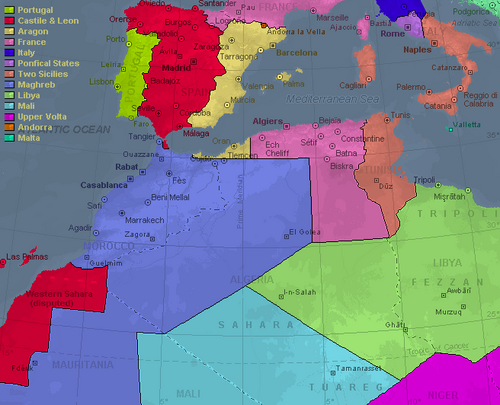 Map of Iberia, the Two Sicilies and North Africa

The vast, vast majority of Sicilians are Catholics. There are two types of Catholics in the country: the Latin rite and the Uniates, whose members are almost entirely Greeks, Albanians, & a scattering of Slavic-descended families. The next largest group in the country are Orthodox Christians. The Greeks of Two Sicilies have been present since Italy's colonization in the 800's B.C. and had no objection when Emperor [] placed the Italian domains under the jurisdiction of Constantinople in 9XX. The people have been celebrating the liturgy in Greek in Italy since the first days of Christianity in Italy. Although the Normans tried (sometimes violently) stamping out Orthodox Christianity since the Norman invasion of the peninsula in the 11th Century, the state was never successful and indeed in the late 19th Century's advent of nationalism, many of Two Sicilies' Greeks (and Albanians) left state-tolerated Uniatism for Orthodox Christianity. There was a limited Protestant movement in the country descended from returnees who converted to Protestantism abroad (usually the NAL), but their numbers are extremely low. The Waldensians, whose religion predates the Reformation, also have a minuscule presence in the mountain villages of Guardia dei Valdi in Calabria, Mormanno, Vaccarizzo and Montalto. The only non-Christian groups of any note are Jews and Muslims. The former group has been present in southern Italy since the Roman Republic, the latter group only descends from North African subjects of the Crown of Aragon who began moving to their colonial metropole in the late 19th Century. Maghrebi immigration from Tunis and Libya is by far the steadiest stream of immigration to the Kingdom of the Two Sicilies since the Second Great War.