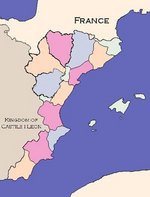 Aragon is a unitary state subdivided into six regions and several provinces:

The regions and provinces are:

Among the first known cities in Iberia was Cartagena, a permanent trading depot established by the Carthaginians along the Murcian coast. Later, when Rome ruled much of Europe, the land area now known as Aragon was called Hispania Terraconensis.

Valencia was founded by the Romans in 137 BC on the site of a former Iberian town, near the river Turia. This river was rerouted in modern times following a terrible flood, and the dry bed was converted into a park.

The Visigoths took over following the demise of Rome, but were supplanted first by Moors, then Aragonese and Moors again. It was incorporated into the Kingdom of Valencia in 1238. Following the dissolution of the Roman Empire and the fall of the Visigoths to the invading Moors the southernmost counties of the Frankish empire were protected by the buffer state of ‘Marca Hispania’ the area in and around Barcelona.

This area named Catalonia attributes its name to Ramon Berenguer III, the Count of Barcelona, who was often referred to as catalanius heroes, rector catanicus, and dux catalanensis. In the 12th century texts where these titles are given, reference is made to the catalanenses appearing beside gots or Goths, the people of southern France.

Beginning in 1035 Aragon was the name of an independent kingdom ruling not only the present territories, but the Balearic Islands, Valencia, Murcia, Sicily, Naples and Sardinia, though a later schism took away Naples, Sicily and Sardinia.

Catalonia joined Aragon in 1137 when the counts became the Aragonese kings, but Catalonia and Aragon retained their traditional rights, as did Murcia until the western Iberian coast was solidified into the Kingdom of Aragon by the 13th century.

King Ferdinand V of Aragon, Sicily and Naples tried to solidify the Iberian Peninsula in 1469 through his marriage to Isabella of Castile, but the Castilian throne was ultimately occupied by Isabella's brother Alfonso. Nevertheless, Ferdinand managed to exert some degree of influence over Castilian affairs, although he was never able to unite the two kingdoms.

While Zaragoza was the capital, the real centre of this kingdom was Barcelona, since it was a seaport located near the geographical center of the Crown, and also one of the political centers of the Crown, with its Consell de Cent ruling the laws of Catalonia. Other important seaports were Valencia and Mallorca. Both Zaragoza and Valencia had a larger population than Barcelona until the 18th century, when the walls of Barcelona were taken down and the city outgrew all others in the territories of the former Crown.

Some present-day historians may call the Crown the "Catalan-Aragonese Confederation", since this reflects the composition of the state, but its most usual name is "Crown of Aragon". Barcelona was the center of what was in many ways a Mediterranean Empire, ruling the Mediterranean Sea and setting rules for the entire sea (for instance, in the Llibre del Consolat del Mar, a compilation of maritime law in Catalan).

In the Late Middle Ages, the Aragonese expansion southwards met with the Castilian advance northward in the region of Murcia. Afterward, the Aragonese empire focused on the Mediterranean, acting as far as Greece and Barbary.

The union of the two territories of Catalonia and Aragon was caused by the marriage of Ramon_Berenguer_IV,_Count_of_Barcelona and Petronila of Aragon, later Queen of Aragon. This merged the County of Barcelona with the Kingdom of Aragon under the name of "Crown of Aragon". Their son, Alfonso II, inherited both titles. This union was made while respecting the existing institutions of both places. This situation was maintained until the abolition of the state, at the beginning of the 18th century.

King James I (13th century) conquered new territories and incorporated Majorca and the region of Valencia into the state. Valencia was made a new kingdom with its own institutions, and so became the third member of the confederation. Majorca, together with the counties of Cerdanya and Roussillon and the city of Montpellier, were given to his son James and were named the Kingdom of Majorca, but these territories were reincorporated in year 1349.

The expansion across the Mediterranean Sea continued to (Sicily, Minorca and Sardinia). In 1410, King Martin I died without descendants. This caused Ferdinand of Antequera from the Castilian dynasty of Trastamara to made king of the Crown of Aragon.

In the beginning of the 19th century, the political unrest in Europe expanded to their American colonies. After a French republic attempted to solve some border disputes with Aragon by invading, the fierce Aragonese resistance led to the peace of Barcelona in 1802. From the reminds of the Napoleonic wars, Aragon was a close ally to France.

In 1809 the French and the Aragonese invaded Castile and Leon and Portugal, king Alfonso XIV of Castile and Leon fled to New Granada and organized the courts there. King Pedro of Portugal was imprisoned by Napoleon. Joseph Bonaparte was put on the Portuguese throne.

Aragon declared war against the Triple Alliance (Federated Kingdoms, Austria, Russia). This led the English to attempt to take Bons Aires. While the English failed to set foot on Riu d'Archent, they managed an effective blockade that practically cut off Bons Aires from Barcelona.

While the partisans in Castilla fiercely fought the French and the Aragonese. Alfonso of Castile, formally joined the Triple Alliance and organized an attack against Riu d'Archent from his American territories.

Riu d'Archent was formally returned to Aragon in 1819, but by this time, Argentinians had been cut off from the metropolis for too long. They asked for an autonomous status which was granted in 1823. Riu d'Archent elected its own Parliament, and Cabinet, while recognizing king Ferdinand of Aragon as their monarch. From the beginning the Argentines supported the rebellion in São Paulo. This led to a Portuguese invasion of Uruguay in 1819, short after Aragon demilitarized Buen Ayre.

São Paulo finally defeated the royalists at Rio de Janeiro in 1822, freeing Uruguay. However the devolution was not automatic, as Aragon had not recognized the new Republic of Brazil. Riu d'Archent was not allowed to recognize or send ambassadors to foreign powers, but by 1827, Paraná handed Uruguay back to Riu d'Archent.

In 1876, Aragon granted dominion status to Riu d'Archent. The Argentians were content to keep the king in Zaragoza as their monarch.

Aragon is located in the east of the Iberian Peninsula.

Aragonese is the official language in Aragon and is used in all official government documents and correspondences. The second-most spoken language and co-official in the Crown of Catalonia is Catalan, a language that's more likely just a dialect of Narbonosc (which both the Aragonese state has always emphatically denied that so as to ward off potential French influences making inroads into Catalunya and Catalan nationalists deny because it would rob Catalonia of a unique part of its identity if Catalan just turned out to be not but a variant of Narbonosc). The Aragonese dialects of Murzia and Valenzia are almost their own languages as they little intelligibility with the northerly dialects of Aragonese, and their classification as the same language might be more political in nature as these respective Iberian Romance forms evolved separately from the Huesca Valley and were only pulled into Aragonese's orbit after the Reconquista and the glorious entrance of King James I into the cities of Balansiyya in 1238 and 28 years later in the Madinat Mursiyah (مدينة مرسية) in 1266.

The Balearic Islands also has its own unique language. Baliaru—also known as Balearic Creole—is spoken by 56% of the population as their native language or one of native languages, with approximately 80% of the population having at least some degree of knowledge of the language. Having evolved from Mediterranean Lingua Franca, and Sicilian spoken by the settlers who came to the islands in multiple waves between the 13th and 16th centuries, the language is nowadays in a unique position: while not having the status of an official language, it is a major language of everyday life, business, media, less formal areas of politics, or popular literature, among other areas. The government recognises it as a national language which does not constitute a legal status or rules regarding its usage, yet implies a certain degree of governmental protection and support. The majority of its native speakers are descendants of the (predominantly Sicilian) settlers.

Byzantine refugees poured into the country starting after 1453, going all over Western Europe but mostly at first just to Italy. The Crown found these refugees useful and forcefully resettled many of them out of Italy to make way for Aragonese & Catalan settlers in its Kingdom of the Two Sicilies and into Valencia where they would act as a loyal base against the Muslims left in Valencia and the urban bourgeoisie which led popular revolts against the Crown when their profits were threatened. The Byzantines did almost too well for the likes of the monarchy and became almost too successful for what made the government comfortable. In time, those refugees' descendants economically outmaneuvered both the native Muslims and Jews and the Catholic bourgeoisie of the region who were a mix of native Christians and transplants from Aragon proper and Catalonia. For the most part, they barely assimilated, keeping Aragonese a distant second language and not commeorating the pope in their liturgies as they were commanded to do or switching to the Latin rite at all. When the New World was discovered and Italian mariners sailing for Zaragoza discovered unclaimed territory south of the Portuguese settlements, the court officials knew what they could do with the too-successful Greeks (Romans). They were chosen to seed the country's new colony in 1589. Some (but not all) of the Byzanto-Aragonese were rounded up against their will and sailed across the Atlantic. This consensual exile gave birth to the twin countries of Nea Illenicia and Riu d'Archent and the rest as they say, is history. Not all Roman refugees were rounded up. Many were never called up to sail west, but this forced removal was such a psychological blow to these Greek-speakers (and Albanian, and Slavic, and Tsakonian, and quite possibly mixed Greek-Turkish) that the community was never the same. Slowly slowly, the local Greeks started to impose assimilation on themselves, at first speaking only Aragonese outside the home and Greek inside but then later on Aragonese in it. The people stopped Orthodox Christianity and loyalty to the ecumenical patriarch alive in their parish churches and their homes. Soon after the Expulsion, the pope began to be commemorated in the liturgy of their churches, making them properly Uniates, but even then as assimilation into Aragonese life accelerated, the common people just started going to the Latin rite churches outside their ethnic enclaves. Uniate churches had their iconostases torn down as they were converted into bog-standard, Latin rite ones. In the year 2020, only about 54,000 people in Valencia keep Greek alive (called 'Romeico' now) out of the 86,000 who identity as Romeico/Griego, and many of the average people of Valencia are wholly unaware that they have Byzantine refugee ancestry, be they the descendants of actual ethnic Greeks, Albanians, Slavs, Greeks from Italy, or even Hellenized Turks that stayed loyal to the Emperor and the Res Publica even when fellow Turks destroyed them both. There is no Greek Catholic Church of Aragon. Churches with use the Byzantine rite either in liturgical Greek or modern Aragonese or the Latin rite parish of San Nicolás in Chábea (OTL Xàbia, Valencia) which worships in Koine Greek, are all under the local Latin rite bishops.

The most practiced religion is Isidoran Rite Catholicism. Owing to a more relaxed legal system that guaranteed religious freedom in the 19th Century, as well as English Protestant proselytisation during the period of English rule, a sizable minority of the population of Minorca is oddly Protestant, primarily Presbyterian.