A former colonial power in South America, Portugal today is a quiet European country, famous for its wines and sardines.

Originally ruled by the Phoenicians from about 1104 BC. Rule passed from the Phoenicians to the Carthaginians from 258 BC. In 194 BC the native Lusitanians rose up, but were subdued by the Romans. As the Roman Empire fell to pieces, the Suevi in 409 AD and the Visigoths in 416 moved in.

Shortly thereafter, in 711, the Arabs crossed the Straits of Gibraltar, but were beaten back by the Asturians and Leonese in 739.

The name of Portugal derives from the ancient city of Cale, a city on the estuary of Douro River. Some would say that Cale is from the greek Kalles, or Beautiful. Some attribute the name to Phoenicia. As the Romans took control of the area, it was renamed to Portus Cale, or Port of Cale.

Beginning in the Middle ages, the Visigoth King Luivegildus and his successors coined moneys with the name ‘Portucale’, which over time shifted to Portugale. In the 9th Century, the name was used for the region between the Douro and Minho rivers. By the 11th Century, the province had gained importance like Galicia to the north, and became a county in the Kingdom of Leon. Differing from most Europe, Portugal is the same nation that was granted independence in the 12th century. The name changed slightly, but it was always known as Portugal.

Some scientists estimate that Portugal has been inhabited for at least for 500,000 years. In the years following 1000 BC several influxes of European peoples began, beginning with the Celts. These mixed with local peoples and came to be known as Lusitanians if they lived between the Douro and Tagus rivers and Calaicians if they lived north of the Douro river.

In the 200 years following the first invasion of the Romans into Iberia all groups were dominated and Romanized following the Punic Wars with Carthage. Lusitania proved difficult to conquer because Viriathus, leader of Lusitania since 194 BC worked to reconquer Iberia. In 155 BC the Lusitanian war was begun, but ended quickly as the Lusitanians were betrayed from within. A colonial regime was established, and many cities and towns were founded.

In 27 BC Lusitania was granted status of Province in the Empire, which was later divided into Provinces of Lusitania and Galicia.

The peace enjoyed in Lusitania was shattered in the 5th century when Germanic tribes called popularly ‘Barbarians’ invaded. Among them were the Suevi, who stopped fighting and founded a kingdom covering a large area of modern Portugal, but this was short lived, when the Visigoths later conquered them and began ruling the peninsula.

In the 1500's Portugal discovered the Azores and exacted retribution against the Vissi people there, as they were certain that these people were, in-fact, descendents of the barbarians that had overrun them so many centuries prior. Historians of the day quickly disputed the fact, and only recently did this interesting historical twist of fate come to the surface.

Portugal was a major player in world affairs in the 16th century, establishing colonies in Guinea, in India, in Malacca, and large portions of South America. However, from the 17th century onwards, they were outcompeted by other European maritime powers in Guinea and India, and were expelled from Malacca by Xrivizaja, though they held on to Timor. They also have a colony called Macao in China, which was conquered by the Chinese during the Great Oriental War. After the war, they worked out an arrangement with Canton to get it back in exchange for Portugal funding its complete reconstruction. Initially, the city was legally a "Portuguese overseas province" (uma província ultramarina), but in 1976 parliament passed an organic statue which transformed Macao into an "autonomous region" on par with Madeira and the Azores Islands. In 1990, parliament accepted the request by the government of Timor Oriental for dominionhood status. To this day, the Portuguese monarchs are still the head of state in Timor.

Today, Portugal plays only a minor role in world affairs. However, in the mainland, the Azores (os Açores), and its Asian colonies alike it is a ridiculously popular tourist destination, with the tourism sector bringing in billions of peças per year. 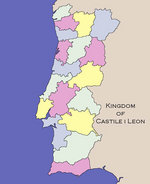 Madeira, Macao, São Tomé e Príncipe, Cabo Verde, and the Azores are treated as Autonomous Regions. There has been discussion of redistricting the administrative divisions of the nation, however this proposal is not yet being discussed in the halls of government in Lisbon.