The New Kingdom of Granada is the South American part of the Kingdom of Castile and Leon.

The head of state is King Alfonso José of Castile and Leon, and the chief of state is the prime minister, Luis Ignacio Escobar. The current governor-general is Álvaro Uribe.

Each governorship has its own governor (gobernador) and legislative assembly (asamblea legislativa), the provinces have a provincial junta (junta provincial) which shares legislative and executive powers and each commune has a mayor (alcalde) and a communal council (concejo municipal).

The governorships and provinces are:

Settled by several pre-Hispanic nations with different degrees of development, New Granada was where the first Castilian settlements on the continent took place. They called this land "Têrra Firme" and built the first European cities in South America by 1509. In 1536, the first inland city was founded to which the Castilians gave the name New Granada.

The first colonial institutions date from 1550, and New Granada was promoted to a viceroyalty in 1722. New Granada remained royalist during the independence movements in the early 19th century, and remained attached to Castile until the early 20th century, when a republican coup deposed King Juan from the European part of Castile.

New Granada proved its loyalty to the king and became the New Kingdom of Castile and León during the republican and phalangist interlude in European Castile. 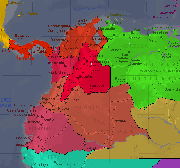 Map of the New Kingdom of Granada

The New Kingdom of Granada is limited by:

The people of New Granada have a diversity of origins, culturally, linguistically and racially.

The New Granadians comprise three main races: the Indians (the native inhabitants of the Americas), the whites from Europe, and the blacks from Africa, but each of these main color groups is composed of a diversity of ethnicities combined through intermarriage.

There are many Indian groups, like the Chibcha around Santa Fe, the Quichua in the south, the Paez, the Embera, the Kuna and the Waiyuu, preserving their languages and many traditional elements.

Most of the white people have come from Castile proper, but there has also been some immigration from other European countries, either via Castile or directly to the Americas. The Castilians are, however, far from a monolitic ethnicity. Pre-Roman people like the Basques and the Iberians, the Romans, Germanic tribes like the Visigoths, and the Moors are part of the strokes in the blood of those Castilians that came to the New Kingdom.

The blacks were brought as slaves to mine the ores and harvest the plantations' crops. The white masters tried to break their original cultures, baptizing them and forbidding them to speak their African languages. A few elements, however, of their original cultures survived in the Americas, like their music and the santería. Santería and Voodoo are not as strong in New Granada as they are in Florida-Caribbea, Hayti or Louissiane, but they exist combined with and competing with the Indian shamanism.

The most widely practiced religion is Catholicism.