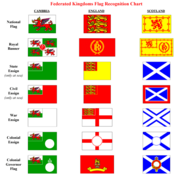 flags recognition chart of the 3 kingdoms

The Federated Kingdoms are a federation of three sovereign states, England, Kemr and Scotland, occupying the island of Great Britain off the north-west coast of continental Europe. The island is separated from the continent by the British Sea and from Ireland by the Irish Sea.

The modern Federated Kingdoms date from the Act of Federation, passed by the English Parliament in 1805 in response to the French threat. The three Kingdoms --- England, Scotland, and Kemr --- are officially equal participants, although there is a personal union between England and Scotland (i.e., they have the same monarch).

Federation is implemented by a process of mutual representation. Each parliament elects two groups of representatives who attend the other two parliaments as full voting members. This applies separately to the Lords Temporal and Commons.

In addition, the two monarchs have an extralegal, but constitutionally firmly entrenched, program of exchanging Privy Councillors. Since in the eyes of the law the Cabinet is a mere committee of the Privy Council, there are invariably Cabinet members in each kingdom who are M.P.s from the other kingdoms. A detailed system of Committees of Correspondence maintains uniformity in matters of external defense, and formerly in matters of the overseas possessions as well.

One difference between the English and Scottish parliamentary systems and the Kemrese one is that the Royal Assent is not quite as much a matter of form in Cambria as it is elsewhere. Although the present monarch, King Pedr V, or his grandfather, King Gereint XIII, has never refused the Assent, Gereint's late father did so or threatened to do so on more than one occasion, particularly in connection with the Budget of 1911.

Oddly, despite the personal union, Scots law is more different from English and Kemrese law than they are from each other. Cambria and England never received Roman law (the Codex of Justinian) as Scotland did, although there are both Roman and Celtic customary legal systems at the base of Cambriese law. Nevertheless, Cambria is now more a common law than a civil law country: jury trials of course exist there, though not quite in English or Scottish form.

Ireland was never part of the F.K., but was ruled from 1155 to 1922 as a dependency of Kemr; the "rule" was often no more than nominal in the Northland (Uladh), where the control of Goidelic petty kings remained strong. King Pedr II of Cambria, armed with the Laudabiliter bull from Pope Adrian IV, took the submissions of most of the Irish rulers, and created his son Iewan Dominus Hiberniae. Eventually an Irish Parliament parallel to the Kemrese one evolved, representing at first only the interests of the colonists. This Parliament, however, was entirely subordinate to the Kemrese Government.

After the Act of Federation, Kemrese control of the Emerald Isle came to be a matter of mostly benign neglect. However, a failure to recognize the legitimate aspirations of the native Irish, plus a comparable tendency to allow the Cambro-Irish to have matters too much their own way, caused Ireland to seethe with increasingly military revolts throughout the 18th and 19th centuries. The enfranchisement of the native Irish in 1822 did nothing to quiet the agitation for a Free State. After Great War I, the Cambriese in the mother country grew weary of supporting their arrogant relatives to the west, and made plans culminating in the Great Withdrawal and creation of the Irish Free State, a self-governing country with only the most tenuous connection to the Crown. The Free State eventually unilaterally repudiated monarchical government and quietly transformed itself in 1956 into a republic.

(Very old entry. May be innacurate in parts.)

Overview map of the FK and its neighbors

In Ill Bethisad, there is no "Great Britain", so it's not really appropriate to speak of "British" people the way we do *here* when we mean the English, Scots, Welsh, Irish and Cornish together. According to John Cowan: "As J.R.R. Tolkien says, at the Act of Union (*here*), '[i]n the quite unnecessary desire for a common name, the English were officially deprived of their Englishry, and the Welsh of their claim to be the primary inheritors of the title 'British'.'" In IB that did not happen.

Domestically, the FK as an organization isn't that important: it has no real constitutional existence anyway, being essentially an exchange of Privy Councillors at the pleasure of the monarchs involved plus a set of committees in each House for correspondence with the other five Houses. In foreign affairs it is very important, of course, because the three kingdoms *do* act in concert in that context. [It is also important as a consortium of national banks, as foreign exchanges around the world are generally in Federated (or Commonwealth) pounds, rather than English or Kemrese. Nevertheless, any actual money that is received from such an exchange could be Scottish, English, Dumnonian, Kemrese, Australasian, or any other Commonwealth currency note, which is in union with the standard.

Consequently, people see themselves as English or Scots or Kemrese first of all, and citizens of the FC [FK] very much afterwards. And so "British" can be applied geographically to Britain/lla Ysl Prydain, but not normally to the non-Cambrian people thereof.

(Bizarrely, "Prydain" does not appear in Andrew Fferreir's dictionary, but surely this is an oversight; I hardly see what else the word could be.)

As to the four words for Cambrians, "Cambrian" is scholarly, "Kemrese" refers to citizens of Kemr whether technically Cambrian or not, "Welsh" is the ordinary English name of the ethnos (and also a verb signifying "to refuse to pay one's just debts", a consequence of English misunderstanding of Kemrese law), and "British" is historical or antiquarian."

Nevertheless, the term "British" is extremely convenient for those of us *here* to refer to the peoples of Prydain, the British Isle, *there*. Also, it is a term of convenience used by foreigners *there*, especially in the press where an economy of terms is deemed appropriate. In other words, rather than saying "the Governments of England, Scotland and Kemr" a news story might read "the British Governments". Also, it is a convenient adjective that fills the space caused by the lack of an adjective based on "FK" or "Federated Kingdoms".

FK territories in and around Africa:

Graphic displaying the wind installations of the FK.

The Federated Kingdom is the world leader in the implementation of Tesla Generators, but has also chosen to use other forms, such as wind power.