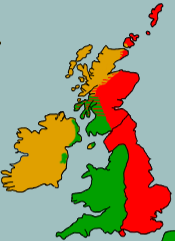 Language Families of Britain and Ireland

Not a misspelling of Gaeilge. It is, in face, the name of the Caighdeán Oifigiúil used in An tAonsdát Éireann. The biggest differences are that the Munster Gaelic influences aren't so great, it's based primarily around the modern literary and vulgar dialects of North Connacht and Ulster *there*, with Classical Gaelic as a strong peripheral influence (though I'll need to get a good reference on that before I can really flesh it out), and ought to be somewhat more palatable to Scots Gaelic speakers.

I flirted with the idea of making the spelling look a bit more archaic by spelling it Gaoilg, which is quite close to the Middle Irish spelling, but decided against it as Gaeilg is a pretty good approximation of what the Classical Gaelic spelling Gaedhealg would have become with the spelling reforms.

Gaeilg has far fewer direct borrowings from English. They're not absent, but due to historical differences with *here*, are far sparser. As I compile a word list for it, I'm trying to keep any vocabulary that could have been plausibly borrowed from either English or Brithenig as close as possible to what it is *here*. However, there are slight differences. For instance, *here*'s náisiúnta becomes *there*'s náidhiúnta from Brithenig. Sometimes words have a different meaning, such as *there*'s Bíúro, which means desk *here* but office/bureau *there* in place of *here*'s Oifig.

The language has a more northern feel to it. For instance the word for harp *there* is clársach as would be found in Scots Gaelic and northern dialects of Irish *here*, rather than *here*'s cláirseach in Irish Gaelic.

Gaeilg consistently uses acute accents to represent síneadh fada (the long accent). Grave accents are sometimes used in Scotland, but it's considered rather old-fashioned. It also went through an aggressive spelling reform like *here*, although the degree of aggressiveness wasn't quite as pronounced.

I need to find some books on Classical Gaelic and a decent Scots Gaelic grammar so I can work out exactly what the transformations were.