Settled initially by the Cournouaillians of France, the population of Nouvelle Cournouaille was later nearly doubled by a mass migration of Mormon emigrants who settled in the west of the Préfecture.

A land purchase in an CCXII has elongated the Western Borders of Louisianne, creating the Département of Alpes-Argentés, and allowing for growth in the downhill ski resorts. One of which, Tremble, or Aspen, has been bought by Roberto Redford, Alta-Californian emigré to Oregon, who now has his sights set on developing and ecotopic ski-resort, and possibly a film festival.

Recent news has revealed that this land purchase may have been a move to secure more silver for the Louisiannan Coffers. 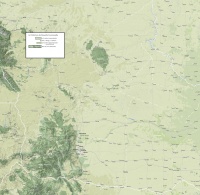 A detailed map of Nouvelle Cournouaille

Nouvelle Cournouaille is limited by:

Historically, Nouvelle Cournouaille has been the center for mining, and ranching. In recent years, tourism has become a growth industry, as has mining with the silver in the Alpes-Argentés. Johannes Yager promised in his election campaign to bring other industries to Nouvelle Cournouaille to complement the large number of highly educated persons.

The Asimoupoli-Warmenhuizen freight line terminates in Western Rocheuses. It was originally built to a narrow gauge, but was repeatedly upgraded throughout its length. Until recently it was run privately, but recent talks have been brokered between CFL and {the private rail company whose name is in Greek} to transfer the assets, now that robbery is a much less-likely concern. There are also talks of widening the track base to accommodate a transcontinental High-Speed Rail, with a stop in Asimoupoli.

One of Louisianne's renowned colleges is Joseph and Brigham the Mormon owned school with a student body of nearly 30,000 students, a great many of them international students from the NAL-SLC and Oregon. The University of New Cornwall is involved in research and is internationally renowned for its contribution to computing sciences. In 2013 a large campus for Solas Teoranta was opened adjacent to UNC, allowing the students to have hands-on internships, and providing Solas with an influx of newly trained employees to increase computing technology the world over.