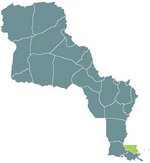 A map of Louisianne, showing the Pont-Chartrain.

This département is reputedly named after a Catholic Father from Chartres, France who wished to bridge the grand bay (often mistaken as a lake) Pontchartrain. The name in olden times was Pont Chartrian but through force of usage it has become Pont-Chartrain, and the lake/bay itself is referred to as Lake Pontchartrain.

Because the lake is in reality an inlet of the Caribbean Sea, when furocanos come through the region, the lake level often rises. Because of this, and the ravages of last season, and the outlook of the present furocano season, it is expected that much of the development of the region will slow.

This region has been most heavily ravaged by the radioactive rainfall because of the Florida-Caribbean nuclear bomb that exploded last year. This region is known for its resort attitude and is home to many snow-birds who flee the colder regions of Louisianne in the winter months. A large portion of the southern regions has been permanently evacuated pending environmental assessment.

This effort has been hindered further by the New Orleans Furocano that caused massive flooding of the Big Easy.