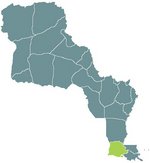 A map of Louisianne, showing the Côte de Châtaigne.

The Côte de Châtaigne is named such for the muddy waters of the Gulf of Mejico. The title means "The Chestnut Coast". This generally placid body of water serves as the resort locale of Louisianne and harks to the French Côte d'Azure. Because of this resort mentality, a great many tourists come to this region, and there have been great construction projects of both gambling establishments and resort hotels, bringing a great deal of wealth to the Cajun community.

Major industries in the region are oil production and refining, as well as the shrimp farming industry. Prior to present there have been many disputes between Tejas, the NAL and Florida-Caribbea. It is not yet known how much the nuclear attack of 2004 will affect this industry. The Republic has initiated a large-scale clean-up project to reduce and if possible remove the effects of Florida-Caribbea's violence.

Along with ongoing cleaning efforts, efforts are underway to understand and mitigate the effect of the development along the fragile coastline. Already there has been small but noteable loss of land in the bayous as the mighty Mississippi has been redirected and channeled for the first construction projects. A moratorium is in place until such time as a proper course of action can be identified. Opponents suggest that this moratorium is funded in large part by the existing resorts and casinos who wish to maintain their monopoly.