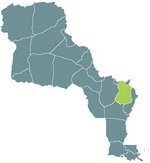 A map of Louisianne, showing the Côte d'Or.

Named after the département of France, Côte d'Or was settled predominantly by emigrants of that region, as was a great deal of Louisianne. Because of this influx, the Côte d'Oriens have influenced the language of Louisianne, causing the Louisiannan dialect of Francien to carry a trilled-r instead of the typical Parisian R.

The Côte d'Or of Louisianne is also the wine-making region, with the rolling bluffs and hills of the Ozarques perfect for vignobles. The Côte d'Oriens who settled the area were deeply attached to the Beaujolais wines of central France, and after many years of trial and error were able to develop a Louisiannan wine of similar caliber. This of course sparked the ire of the Beaujolais region of France, and led to trade sanctions for the first part of the 20th century. After years of negotiation Beaujolais Louisiannais was granted membership in the Appelation Contrôlé.