As capitol of Louisianne, Paris-sur-Mizouri was granted separate status from the Préfecture of Osage shortly after its creation in the late 90's (XC; Gregorian 1880's). This grants the capitol a larger liberty to self-rule and law creation and enforcement, but doesn't release it completely from control of Osage. This concept was later applied to the Prefectoral and regional capitols between CLXX and CLXXX.

The Zone Capitale is treated as any other comté within the Préfecture, and thus has a much larger self-rule. All incorporated cities are treated this way. (cross-reference Cities within Virginia *here*). As Paris-sur-Mizouri has expereienced urban sprawl, the name "Zone Capitale" and "Paris-sur-Mizouri" have become synonymous and interchangeable. However, most persons refer to it as Parimiz or simply Paris. The inhabitants of the region prefer to be called Parizot(te)s.

The earliest european settlement dates back to 1821 with the establishment of Bac de Lohman or Lohman's Landing. This trading post continued until it was usurped by mandate of the National Assembly in 1840. While the name suggested by Armand Beauvais was initially accepted, Paris de Franco-Amérique, it was quickly shot-down in favor of the current name, despite Armand Beauvais' lobby against it.

Construction of The Capitol Complex began in 1840, but was delayed until 1855. At the time of the assassination of Joseph and Hyrum Smith only the steps of the Assembly Building had been constructed, and a wooden building had been built to the rough dimensions of the designs of Henri Labrouste.

Paul Octave Hebert reversed the decision of his predecessor André Bienvenu Roman and initiated construction on the National Assembly and the Tribunal de la République. With the second presidency of Roman construction had been completed. After Alexandre Mouton took office, he commissioned the Presidential Palace which was not finished until 1889.

The Bibliothèque Nationale was not completed until 1964. It has since grown to become one of the more respected government libraries around the world.

In the spring of an CCI (1993) Paris-sur-Mizouri spent 62 days in flood and sand-bag as massive drainage from the Montagnes Rocheuses drained across the plain, flooding the Mizouri and Mississippi. Because of this, plans were instigated to maintain the protection of the city and its suburbs. Only harder hit were major cities to the south, Saint-Louis, Baton Rouge and New Orleans.

To protect the integrity of the Capitol Complex, the National Assembly passed legislation enabling the tunnelization of the trans-mizourian Transcontinental Highway through the central city limits. When construction is complete in an CCXVIII (2010), the current highway that passes through the city limits will be destroyed and turned into either broad avenues or parkland, depending on its locale.

Paris-sur-Mizouri is home to several newspapers, most notably:

As the national capital, Paris-sur-Mizouri has grown into a tourist destination, including government buildings, museums, and the Louisiannan National Zoo. 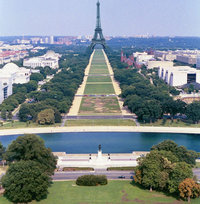 View from the Capitol Complex across to the Louisianna Tower.

Important landmarks in Paris-sur-Mizouri include: