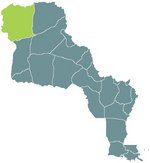 A map of Louisianne, showing Bretagne.

The Eastern half of Nouvelle Navarre. Created by the Louisiannan government in the first half of the 20th Century, it was named after the homeland of the settlers, Bretagne, in France.

Mining has taken off in the last years as the Sioux and Daquota tribes have begun leasing the rights to the government to mine the Noirraines.

The département is also the primary setting for the novel series La Chronique des Désirs Interdits by Victorine le Maire.