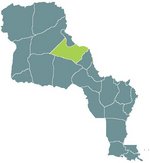 A map of Louisianne, showing the Nyobrara.

Named after the river that flows through this northern département, Nyobrara is a transliteration of a native american name for the region. Nyobrara is among the youngest of départements in Louisianne, and was one of the last to be incorporated as a département from its status as térritoire. A large number of Daquota and Sioux tribes live in the region.

There is also a great deal of farming and ranching in the area.