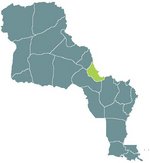 A map of Louisianne, showing the Mizouri.

Flag of the Département

Mizouri, like all the départements of the plains grows much in the way of soybeans and corn, and is primarily agricultural in its focus.