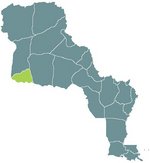 A map of Louisianne, showing the Alpes-Argentés.

The land that is now the Alpes-Argentés was purchased from Tejas for 10 million Écus in 2003. The name comes from the numerous silver mines that have been opened in the region. This mining has caused great pollution of the Rio del Sangre, terribly affecting the agriculture of Alta California, and bringing international furor.

Louisianne has also opened up a number of Ski resorts in the area, and CFL has worked to extend the TGV lines to the area to allow for fast transit from the Eastern population centers to bring tourist trade to the ski resorts.

In the year since their purchase, the Alpes-Argentés have lived up to their name, producing enough silver to pay for a full-third of their purchase price. It is expected that this financial growth is only the beginning.