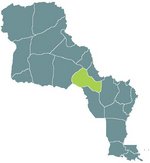 A map of Louisianne, showing the Aurillac.

Named after the Prefecture Capital of the Cantal département of France. Aurillac covers the wide expanse of prairie land, and is most known for the Corn and Soy fields that cover it.

With the recent growth of CFL's TGV lines through the region, Aurillac has seen increased population growth as people move out of the big cities and into the smaller towns. This has increased population and increased the economy, allowing the thriving service-sector to grow in many towns along the rail stops throughout the region.

Recent scandal has caused the prior Sous-Prefect, Georges Lamineux to be oustered on graft charges. Recently elected Frankie Young was a dark horse replacement chosen by the caucus of Republicains Libres to replace the dishonored statesman.