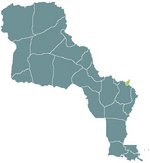 A map of Louisianne, showing the Saint-Louis.

Founded by Pierre Laclede and Auguste Chouteau in 1764 under direction of Prince Jean-Baptiste. This settlement was chosen specifically for its proximity to the waterways that would serve as the life blood of the city. Seeking to honor the King, Laclede named it Saint-Louis. This new settlement took under its wing the monastic Ordre de la Pureté, which had been established two years prior.

From this time the city has grown. In the early 1800's levees of stone were built to allow the new river boats to dock, thus further increasing the trade capacity of the city, bringing it to be Louisianne's second metropolis.

Prior to the arrival of French explorers in 1673, the area that would become Saint-Louis was a major center of the Mississippian Mound Builders, up and down the Mississippi. The presence of numerous mounds, now somewhat destroyed in the area of Saint-Louis, earned that city the nickname of "Mound City." Settlements in the prefecture were initially geared toward wine-making and viticulture, but later expanded into farming and trading with natives.

The major cities grew first along the banks of the Mississippi river, a more reliable route for trade than by land. It also became a gateway for trade and immigration from the NAL-SLC, some by stagecoach and others up the Mizouri River.

European exploration of the area began nearly a century before the city was officially founded. Louis Joliet and Jacques Marquette, both French, traveled through the Mississippi River valley in 1673. Five years later, La Salle claimed the entire valley for France. He called it Louisiana after King Louis XIV; the French also called their region Illinois Country. In 1699, the French built a settlement across the river at Cahokia, near the monumental Cahokia Mounds complex. Other early settlements were downriver at Kaskaskia, Prairie du Pont, Fort de Chartres, and Sainte Genevieve. In 1703, Catholic priests established a small mission at what is now Saint Louis. The mission was later moved across the Mississippi, but the small river at the site (now a drainage channel near the southern boundary of the city of St. Louis) still bears the name Rivière Des Peres (River of the Fathers).

In 1764, Pierre Laclède, his 13-year-old "stepson" Auguste Chouteau, and a small band of men traveled up the Mississippi from New Orleans. In November, they landed a few miles downstream of the river's confluence with the Mizouri River at a site where wooded limestone bluffs rose 40 feet above the river. The men returned to Fort de Chartres for the winter, but in February, LaClede sent Chouteau and 30 men to begin construction. The settlement was established on February 15, 1765.

The settlement began to grow quickly after word arrived that the 1763 Treaty of Paris had given England all the land east of the Mississippi. Frenchmen who had settled to the river's east moved across the water to "Laclede's Village." Other early settlements were established nearby at Saint Charles, Carondelet (now a part of the city of St. Louis), Fleurissant (now Florissant), and Portage des Sioux. In 1765, the French made Saint-Louis the capital of Upper Louisiana.

From 1766 to 1768, St. Louis was governed by the French lieutenant governor, Louis Saint Ange de Bellerive.

Dorris Motorworks negotiated a production plant in the Empire of Japan, and received it after a year.

Saint-Louis is also home to the Brasserie Bavaroise, S.A., the largest beer brewer in the world, and is a major source of strength in the local economy.