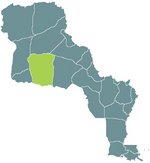 A map of Louisianne, showing the Alpes-Rocheuses.

The formerly furthest west département of Louisianne. Alpes Rocheuses has a very high demographic representation of Mormons, and thus is often referred to as the Mormon département of Louisianne. Alpes-Rocheuses was formerly the home to all the Ski Resorts of Louisianne, but has now been joined by the Alpes-Argentés as well as ones recently opened in Rocheuses. It is still the home to the highest point of the country, that of Pike's Peak, as it's called in English.

The Captiol of the département is Zarahemla. The major and minor cities of the Alpes-Rocheuses bear a high population of Mormons, and many of them are home to temples. In recent years, it has been uncovered that the SDJ Church has maintained secret mines, which have only recently been disclosed. An agreement has been made to repay back-taxes to the Louisiannan Government.