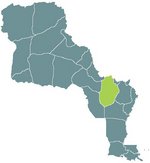 A map of Louisianne, showing the Terre-Platte.

Flag of the Département

TThe heart of the bread-basket of Louisianne, Terre Platte is part of the Osage Plains, and is the source of much of Osage's soybean and corn growth. While historically, Terre Platte was an agricultural region, it has recently become densly populated in the north, between the growth of Paris-sur-Mizouri and Lyons-sur-Mizouri.

At the time of the Mormon's arrival in Louisianne, their initial goal was to settle the region, as it was viewed as their promised land, or Zion. They were rebuffed, first by the local settlers, and later by the government, following the assassination of Joseph Smith, Jr. and his brother Hyrum.

Yonne, a suburb of Paris-sur-Mizouri is home to Air Louisianne and La Poste. Terre Platte is also home to the Mont-Saint-Michel Corporation, an agricultural and pharmaceutical company.