A bustling city of nearly 550,000 persons, the Agglomération Léomizourain accounts for nearly two million persons, including population of the NAL cities across the Mizouri river. Lyons-sur-Mizouri is home to many technical companies, including manufacturing firms that support CFL, RepubliComm and CNEL. 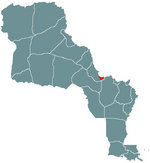 A map showing the location of Lyons-sur-Mizouri.

The city of Lyons-sur-Mizouri, in the Préfecture d'Osage, Louisianne, traces its history back to an XXIX (1821) by a gentleman named François Chouteau from St. Louis. M. Chouteau founded a trading post about 3 miles south of the great bend in the river. After being flooded out in an XXXV (1826), he rebuilt on higher ground.

The small settlement saw some minor action during the 1828 War. In an XLII (1833), a Leaguer by the name of John Calvin McCoy founded another trading post 4 miles south of M. Chouteau's, naming it Westport in his native English. M. McCoy found a rock ledge on the south shore of the Mizouri that made for an ideal landing. With this landing, Westport soon overtook Indépendance as the main source of supplies and departures further west.

The Mormons were the largest influx of non-native settlers, although the duration of their stay in the area was very short lived. The Mormon settlers helped to establish many communities in the area. They are in part credited for the rise of the city, as they helped to establish an infrastructure that later settlers would use. The town of Lyons-sur-Mizouri was officially incorporated in an LXI (1853).

Lyons-sur-Mizouri blossomed when an agreement between Louisianne and the NAL to build a railway bridge over the Mizouri was signed. The site of the bridge was chosen between the Lousianne city of Lyons-sur-Mizouri and the NAL city of Liberté, Les Plaines. The bridge opened on April 5, 1892 (15 Germinal, an C). It was officially known as the Friendship Bridge/Pont de l'Amitié, but was quickly nicknamed the Pont du Siècle (Century Bridge), due to its being the year 100 in the Louisianne calendar. The 417.9 m (1411 p) bridge helped Lyons-sur-Mizouri and Liberté continue their growth. Lyons-sur-Mizouri had already been an important cattle town, but the bridge made it all the more prosperous, as cattle raised further west were shipped across the Pont du Siècle to the NAL.

Both Lyons-sur-Mizouri and Liberté (increasingly today spelled English-style as Liberty) have grown considerably since that time, annexing a number of smaller communities, and spawning a number of suburbs. Lyons-sur-Mizouri has an important foreign trade zone, originally founded in trade with the NAL. There is also an international airport, and several foreign consulates. A fair number of Japanese settled on both sides of the river during the Japanese Civil War. The Japanese community in Lyons-sur-Mizouri is the 2nd largest in Louisianne after Baton Rouge.