Stradling the great plains of North America, Osage is home to the most fertile farm-land of Louisianne. Through the city of Toulouse much international trade flows, and the major hubs of CFL pass through this Préfecture on their way to the northern lands, giving Osage its nick-name of "The Doorway to Louisianne".

Administratively, Osage is divided into four Départements; Aurillac, Garonne-Neuve, Terre Platte, and Mizouri, as well as the Zone Capitale of Paris-sur-Mizouri.

The Prefecture of Osage was created in 1830 following the 1828 war that took Nouvelle Orléans temporarily from Louisianne. With the creation of the préfecture also came the moving of the Capital further north and away from the disputed mouth of the Mississippi. Osage was named after the Native American people, the Wa-zha-zhe, or Children of the Middle Water. 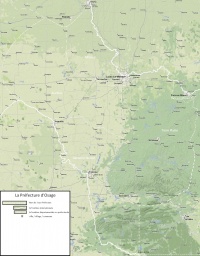 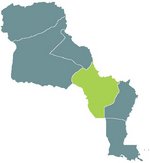 A map of Louisianne, showing Osage.

Osage is bordered by:

Economic interests of Osage have here-to-fore been mostly farming and ranching, although there is some petrochemical production near the Tejan border.

The Japanese company Miçubixi is selling its automobile interests to Dorris Motorworks after protracted negotiations. Key investors are reviewing funding for a motorized-carriage plant to begin domestic construction of Miçubixi vehicles. Also, a Bio-engineering start-up is experimenting with ways to mass produce potatoes in order to boost production, and thus increase Louisiannan exports to the world. Other, more established agriculture firms are greatly pushing their various iterations of soybeans.