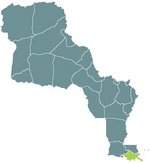 A map of Louisianne, showing the La Salle.

La Salle is the département that surrounds New Orleans and the southern shore of Lake Pontchartrain. It is named after the founder of Louisianne, who established a city after his name that is now part of the suburbs of New Orleans.

La Salle is noted for its colonial architecture. the Pays-Lointains have extensively visited this region as they rebuild themselves following the occupation of Florida-Caribbea.